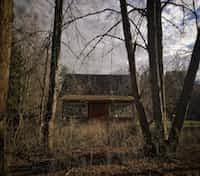 forsakenwell Umm... Does Anybody Want a Cup of Water?
Autoplay OFF   •   2 months ago
Transcript Use Images
***If you haven't read the description, then let your imagination soar.***
I would appreciate comments on my use of language, letc.
this actually came from a scene in a dream of mine.

might be doing the short story on zombie apocalypse - if i have time. this is 1/2 of it, and done so ambiguously. depending on how long I want it, it may have 2 scenes to cut it short with less about the apocalypse. this may be the second scene. I would like suggestions for what to add and change, too! I am just exploring writing as a passion - instead of reading all the time. (not edited draft)
fiction memoriesnostalgiafictionshort storyshortstoryambiguousincompleteghost/spirit

he slammed the door shut and leaned forwards heavy on his palms, panting. he locked and bolted it. it was a door he recognized like the back of his hand.

its vertical edges were lined in faint scratches and dates - not that he could see them in the darkness.

his surroundings were dimly lit through the barred windows above his head. they were barely above ground level.

actually, it was inky black. there was no visible moon, and the windows were tinted a cloudy yellow.

the illumination of this damp place was only a figment of his mind from being here even more often than his bedchamber.

a-hack! the sweet scent of old books hung in the air, which made him sneeze. but but a nauseous smell suddenly wafted up his nose at that moment. it was carried the smell of iron. and rot.

actually, the iron scent was much thicker at this moment - so thick he could even taste it on the back of his throat. No, it did not come from the metalic door - it was made of stainless steel.

something lukewarm creeped through sides of his worn out shoes. he had boots. he had found many over the years, but he didn't wear them often. they were too heavy for his needs.

in fact, if he was not afraid of being infected and becoming a host to parasites, he would have gone barefoot.

he did not have to look to know what seeped in. afterall, that was where the rotting irony smell came from. he had gotten used to the spoiled smell, but he could never ignore the smell of rust.

yes, rust - he assured himself.

he could not help but look up to stare at the 8 by 11 laminated sheet made of dried flowers. it was currently green.

he remembered decorating it with orange cymbidium orchids as a art project in kindergarten. at the end of that year, she took it from him and taped it there.

every year after that, they added a new layer - until the end of high school.

he couldn't resist chuckling raspily as he reminisced the past. but it soon faltered and became strained as he recalled the flowers she had laminated for the last green sheet - hellebores.

Then his orange orchids at the back of the stack. both were vibrant with a hint of white. however, there was a dip and a spray of red for the former and latter. they seemed to be mocking him.

he was running - no hiding - here. he clearly realized that he was doing a very childish thing - he had ran home and hid.

he couldn't ignore the calling, the longing, in his heart after so many years. everything here held memories. or whatever's left of them anyways.

blankly, like a puppet on strings, he instinctively turned around and walked.

smush. a crayon, softened by time and moisture, flattened like butter under his feet. he flinched.

smush. smush. smush. he felt a sharp pang in his heart with every step as he trod over objects laid strewn all over the place.

but his steps didn't waver. they were shaky but rhythmic. he seemed to have a goal, but he didn't.

he suddenly stopped before a filthy rug and stared forward. At the ocean blue couch in front of him.

that was where they sat for years. made a promise. did it.

He wanted to drop to his knees. cry. wail. whine. laugh. shout. but he really couldn't

the motions he went through were redundant.

sounds and emotions only went through his head.

he was distraught. there was nobody for him to share sadness with.

nobody to complain to.

she had left, and he wasn't here.

this was just a wisp of him.

but it refuses to go.

but also a cage.

he did not want it to evaporate with the last strand of him just like that.

he was the musky air

in a glass bottle,

floating in the ocean.

the door opened and he looked up.

The impossibly bright light seemed to glow just for him.

He knew the door was in the right. But it was also unreal.

Afterall, he did not have the right.

he grabbed the sunny summer scarf and the black shirt from the couch before rapping them around his gaping neck. And then he covered a good portion of his face. Of course, he had only taken the essence.

as he played with the scarf, he walked over to his closet. He remembered that it was where many things were hidden.

He grabbed at random a hat and a pair of gloves. he carefully fitted the hat over his head, so that only his eyes peeked out. his hand were a rough fit in the the gloves, so he moved to adjust it.

Oddly, he stopped. He ignored the discomfort coming from his left glove and smiled broadly - so wide it could be seen through the scarf.

He seemed to have found what he seeked, what he needed, and what he loved.

he turned around and looked up at the golden door, with no hesitance left in his gaze. he walked up the invisible stairs, stairs made of hot air.

if he had looked back, it would be a shocking sight, as everything behind him was falling part, turning into dust.

But he wouldn't be shocked. He had taken the soul of this place along with him.