Commaful
The Festival (Chess part: After 7!) 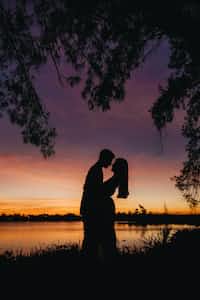 filmrose Simply a writer.
Autoplay OFF   •   a month ago
Transcript Use Images
Film: Hehehe.... So I decided I'm going to skip a whole bunch of parts and just give you this one because I can. :P If any of you want to know what happen in-between I'll write the rest of it for you.
romance romancechessmercylovefilmrosehopehope-dancinghumor

The Festival (Chess part: After 7!)

Timidly Chess brought his lips to Mercy's perfect ones.

The kiss was sweet and full of devotion on both parts.

They shared a smile with Mercy gently slipping her arms around his neck.

"Mercy," Chess murmured against her.

Slowly the prince parted, brushing a loose strand of Mercy's dark hair away from her eyes.

He cupped her face in his hands and pressed a heart-felt kiss to her lips.

"Isn't this the part where you tell me how much you like me," Mercy breathed, her heart beating wildly against him.

Chess laughed, enchanted by the young women before him.

"I like you very much," He assured her, an amused smile tugging at his lips.

"What's that you're smiling about, Chess?"

The prince's gray eyes fixed on her with that of an ardent look she'd never seen before. "Oh, nothing. I just, uh, remembered something Grace told me."

Leaning seductively toward him she pouted, "You're not going to tell me, are you?"

He then pulled away from her, their fingers laced together, and pecked her on the cheek.

"So...." She began, her face slightly red. "Uh, what word would you use to define our relationship currently?"

Her violet eyes found his, an air of silence cast between them.

The fair grounds were usually full of children's screams of delight but at that moment it seemed as if there was only a moment of quietude.

"I suppose...we could be girlfriend and boyfriend."

Mercy tilted her head, considering the idea. "I think you have to take me on an actual date before that's considered official."

The prince rolled his eyes. "I'm the prince of this land, can't I change that rule or something?"

She sighed and pointed to the couples dancing in the parade. "Hmmm, a handsome prince who wants to date me? But, can he dance?"

A challenge showed in her eyes as she pulled him toward the dance floor.

Mercy giggled mischievously. "Would you like to fill my dance card?"

The prince nodded earnestly. "Of course, no one could hold a candle to you."

By @FilmRose (I kinda skipped a lot of parts so if you want to know what happened in between I'll gladly write it and post it for you.)