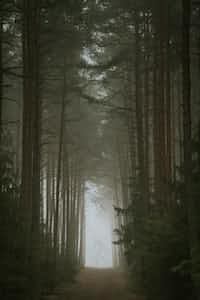 fantasyforlife procrastinating...
Autoplay OFF   •   6 months ago
Transcript Use Images
For the storyland contest
fiction storylandchallengeabandonedmandisbelief

"Hahaha, " the man laughed. He was at the bar, taking a drink with some stranger on the counter, and they were exchanging stories. "Don't laugh," the stranger said, "it is true. Monsters exist, only in some other reality."

That made the man laugh harder. He couldn't believe what his drinking pal was saying. Monsters? Pft, yeah right. "Of course they don't! Those are just stories meant to scare little children; don't tell me you believe it?" and he snorted once more.

The corners of the stranger's mouth turned downward. He was used to this, no one believed him, absolutely no one. He had had enough. He would show this man. "If you put three fingers to your neck and say: Zou heita youngr. I guarantee you won't sleep well tonight.

The man did what he said, annoyed. "You see? Nothing has happened! You are such a fool." The stranger put his glass down, picked up his coat and on his way out said, "We'll see who has the last laugh!" The man, now left alone, decided to go home too. He was tired and no one else would drink with him at this time.

On his way home, he stopped at a nearby store. Soap, he needed to buy soap since the one at home was finishing. As soon as he stepped in, he felt confused. It was pit dark inside. Where had the store gone to? He turned around and bumped into something, something big and slimy.

He stumbled back, and something sharp raked his skin. The man was now frightened. "Who is that?" he called out. "You do not make me afraid, come out now!" he was trembling. Suddenly, the light came back on, and what he saw will forever haunt him.

He saw thousands of being, all with different shapes, different sizes and different colours. From the sneers on their faces, he could tell they weren't here to offer him tea and cookies. One of them yelled a cry, and they started charging towards him. They pecked, bit, scratched, poked, and hit his skin.

He tried to flee, but they were all around him. He then heard a sound in the distance, and they started dispersing. One of them put their face right in front of his and said in a squeaky voice: "We will come for you soon." The man, shaking as hard as a leaf, hobbled to the only exit he could see. Blood was rushing from every bare inch of his skin, trailing behind him as he walked.

He found himself in front of his house when he came out. That night, he shut every single door and window and tried to sleep. It was impossible; he then remembered what the stranger said and let's just say that the man was never the same person again.