Commaful
All for Nothing 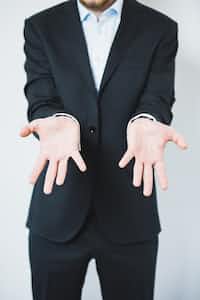 He stood in the office, rolling on the balls of his feet. He wondered what his boss had called him for. Had he done something bad? Impossible; he had made sure his project was immaculate. He looked up and immediately wished he hadn't. His boss was staring at him.

"I have called you here...to tell you I have promoted you! You are now the head of your department," The boss smiled at him. "You will begin your functions tomorrow." He smiled at the boss, but instead of feeling elated, all he felt was nothing. Absolutely nothing.

When he arrived home, silence greeted him. As soon as he sat on the couch, his heart ached. It ached with longing for his wife, for the way she would hug him the moment he got home, for the way there would be the savoury aroma of dinner waiting for him.

"No," he told himself. "I musn't do that, it was my fault she went away, it was because of my selfishness." He remembered the last argument they had before she went away. She had accused him of neglecting her, of always being busy with work. He had told her it was for her, so that they could have a comfortable life.

She had cried, telling him that was not what she wanted. Did he listen? No, he just pushed her away. Now he was facing the consequences, and he knew it. He went to sleep after eating cold pizza for dinner. He hugged her favourite pillow, crying softly against it.

The next day at work, a brass plate was waiting or him on his office door. 'Mr Reynard, Head of Designing Department' He glared at the sign, it had brought nothing good. For he knew that even if he had all the money in the world...

it would never bring her back. -Fantasyforlife20