Commaful
The Daughter of Death 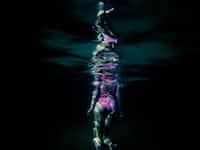 fantastical Let's change some lives!
Autoplay OFF   •   7 months ago
Transcript Use Images
Ever heard of the daughter of Death? Well, hear it when you have the chance!
fiction horrorfictionthrillerstorydark

The Daughter of Death

At the beginning of time, Death was very different than he is today. They say that he dressed like an angel, that he loved to sing and dance, and that he treated life with kindness.

They say Death allowed every creature to live for one hundred years before escorting them to the other side.

But, unlike the other species, humans always grieved the people they lost, despite all the years they had together.

Death found this behavior extremely curious and he became desperate to understand it. So Death created a daughter and sent her into the world of the living.

The separation made Death miss his daughter terribly and he finally understood what it was like to grieve.

He looked forward to reuniting with his daughter once her hundred years of life were over.

Unfortunately for Death, his daughter liked the world of the living. Over time, she learned how to avoid her father and live forever.

On the day of her one-hundredth birthday, Death searched for his daughter everywhere, but he couldn't find her.

Panicked, Death invented disease and injury to help him look, but his daughter was clever and knew how to avoid his inventions, too.

Death was so distraught, he traded his angel wings for the black cloak he's infamous for.

Although it's been thousands of years since he's seen his daughter, Death still hasn't given up hope, and he continues to invent new ways of finding her.

Today, they say whenever Death takes someone before their one hundred years are up, it isn't because he's cruel-he's just searching for his daughter,

and he takes people randomly in case she's wearing a disguise.