Commaful
girl in the world 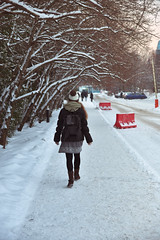 erenah the consolation of verbosity
Autoplay OFF   •   3 years ago
Transcript
A secret comma story about a girl called Johana...
fiction secretcommachristmaswintersnowvery short storydecember

girl in the world

She loved the winters best: the way the world seemed purer

in the cold... renewed by the glitter of the snow so that even Washington’s rudimentary streets seemed lovelier than they were - especially benevolent, illuminated over the long, dark nights.

Alice said it was tacky - not to mention a waste of energy - but, privately, Johana still loved the devotional riggings of light erected across so many buildings and trees, so hopefully.

and a sombre kind of ache, which made her feel younger than she now was; catching in her chest like the icy air.

It was a lonely kind of aching, though - one she didn't know how to share with anyone. Not with Alice, for all that they'd been dating now for six months.

Not with her brother - gone east for school - for all that he was still her favourite person.

She was seventeen, almost grown, and beginning to suspect that feeling this way about things might be permanent: a side-effect of growing up - the changes invisible, but for keeps.

Other times she told herself it was just Washington getting to her, and reminded herself that there were only five more months of high school left - And that, after that, she'd be free...

Free, to leave the sleepy city; free to find out who she wanted to become.

Free, here at the end of childhood, and yet caught between the desire for liberty and the nostalgic longing she still harboured for the past.

Call her Jin, the way he apparently had since she was born, when Johana had somehow been too hard to say - and make sense of things.

That, too, was something she loved about the winter: the way the holidays brought her brother back to her.

Even though the wanderlust was a burning beneath her collarbones by now – the desire to let the earth's momentum cast her adrift on the currents of the world – winter meant Max, meant snow

meant lights gleaming in the cold like a million benedictions

And, just for a little while, it was enough.