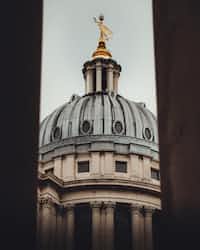 em_jay_hyde i hate it here
Autoplay OFF   •   a year ago
Transcript Use Images
First part of the group story, written by @mythicalrommie. Gives a brief history of the world we are in.
fiction groupstorymythicalfictionkittagons@mythicalrommie

There was a traveler who had lost his trail.

He came across ruins of what seemed to be a well or fountain of some kind and in the water there was something watching him going unnoticed in the depths.

He stared at the phantom shapes that danced across the surface. Alien thoughts filled his mind. A desire to join them overcame his natural instinct as he tumbled over the edge and into the water.

When he awoke sometime later his mind had been wiped clean, his memories erased, with new ones to take their place.

He was sitting on a throne with a woman at his side as the ruler of Skyloft kingdom. King Caleb Alexandria the first and his Queen Krystian Alexandria.

Decades later he finally regained the knowledge of the phantom figures just a day before he died and our current king, King Caleb Alexandria the second, came to rule over Skyloft.

The first king, King Caleb Alexandria the first, had been born in a world with thousands of kittagons,

when he became king another kingdom came with an army quadruple the size of Skyloft's forces.

The king knew they stood no chance against them and gave the order to evacuate the city and let them raze it to the ground.

When the army arrived they were surprised by the kittagon race standing just outside the city walls, guarding it against the incoming raid.

The army had no orders other than to burn and pillage the entire city, so that is what they did.

The kittagon fought back but the power and strength of the opposing force was too strong and only two small babies survived. The king vowed that the race would never die completely.

He would never know if the one he saved was the only one left as the other ran away to tend to it's wounds. They froze the female so that she could be re-awoken when the world needed her most.

King Caleb the First died at 87 of old age. Queen Krystian died at 93 of old age. Caleb Alexandria the Second inherited the throne and married Queen Kayla Alexandria at 24.

The Queen had 2 children, a son and a daughter. Queen Kayla died sadly at 32 giving birth to Cordelia Alexandria.

Arthur and Cordelia are next in line for the throne when King Caleb the Second passes away. The next king will become King Caleb the Third in honor of our first late king.

This is where we stand to this day.