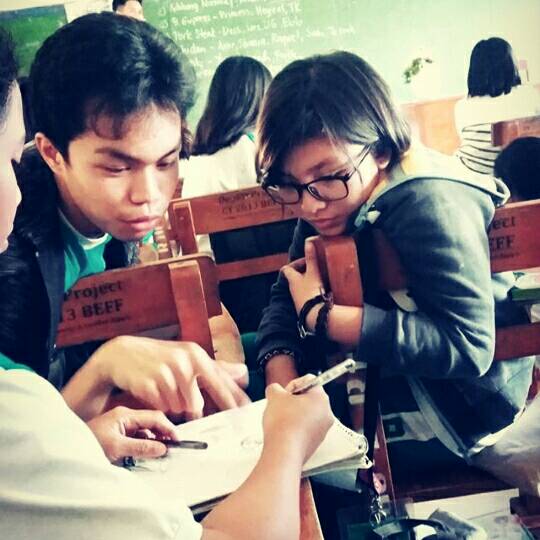 ellis milk, tea, never milk tea
Autoplay OFF   •   3 years ago
Transcript Use Images
The younger brother knows about the cuts.

After dinner, their mother had already gone and cleaned the table, eyeing both her sons with suspicious brows. “Shouldn't you two be taking your baths before bed?” “We're staying a tad longer,” Danny supplied, hoping his impatience hadn't seethed through his tone. Their mother had dismissed herself and disappeared into

the kitchen to wash the dishes. “To think you'd go to this extent,” Abel marveled as soon as she had gone. “Were you this desperate to keep it secret? Even making me stay.” Danny floored him. “How'd you know about the cuts?” “You should take note of who throws your trash out for you.” Danny's face tightened in

disbelief as Abel leaned his body against the table, supporting his head with a palm by the cheek. “You snoop through my trash?” Abel ignored him. “So why do you cut?” “Couldn't it have been a nosebleed?” “It's too late to deny at this

point; you've already admitted,” he snapped, his voice loud enough for only Danny to hear. The older brother rolled his eyes, irritation lifting his heart to his throat. The temperature seemed to rise all around him. “My hand fell asleep, that's all,” he told him coolly. “Dan, you don't fix pins and needles with a blade. Are you

out of your mind?” “I am fine,” he insisted, but Abel was not at all moved. Danny made the gesture to leave and stood. “Now if you'll excuse me, brother, I have homework to do - ” “Stop it.” Freezing, Danny eyed him peculiarly. “Stop what?”

“That, whatever this bullshit is. Take a break, it won't make you any worse in class. Stop trying to act like the same good boy every goddamn time. It hurts seeing you like that.” For a moment, anger flashed across the older child's face. His throat began to constrict, and the blood beneath his shell of skin began to burn. “You can't tell me what to do,” he told Abel.

“Why not work on your own things? It would help you, really. Take it from me.” “Danny,” Abel began calmly. “You're just jealous, aren't you?” Danny chimed in, towering over Abel with a conflicted gaze. “Because Mother and Father look at me like a god and treat you like trash in contrast.

It's not something about me, you know?” His younger brother turned away as Danny's lips pulled into an ominous grin his eyes did not participate in. “It's about you. Fix yourself up, you might just be loved the same way. If you think you can stop me from doing any of my work just because you've seen something they haven't, I hope you know you're not concerned with

anything that I do - ” The next series of events happened quicker than Danny would have processed. One moment he was looming over his brother, spouting one word after another in great attempt to claim even greater dominance; the next Abel jolted into a stand and welcomed his older brother into a tight embrace,

taking Danny completely off guard. “Let go of me,” Danny softly ordered. “No.” Abel's grip grew tighter. “I want you to understand that whatever happens to you, whatever you're going through has everything to do with me.” Danny clicked his tongue. “Let go.”

“Everything,” he repeated. “Just say you envy me!” Abel winced at his volume. “Just say that you know you're stupid, and you're wishing to be like me! You're wishing you could be good at sports and academics without breaking a sweat!

You're wishing you were Mother and Father's favorite son as well! Just admit it already, you're embarrassing yourself.” “I won't admit anything because it's not true!” Abel cried into his brother's shoulder. “Because like Mother and Father… you're my favorite family member.

“Because you made your achievements your meter to tell you if you're worth living or not. Now you're used to the same old system that you're stopping at nothing to get everything done... to - ,” Abel's voice faltered, “to live up to expectations, when you don't have to be trapped in this mess.” Abel asked on, “Tell me, if I asked you who's leading your

life, you wouldn't tell me it's you, would you?” “Danny,” he called out to him softly again. “You're human. And when you're too numb to feel anything, let me be your trigger in place of your own blood. Please.” In his mind's eye, Danny reverted back into a child, running through cornfields with the younger Abel in tow.

In their hands were wooden swords their father made them, and on their heads were paper hats Danny made especially for this adventure. It was a sunny summer afternoon, when beams of sunlight poured through in between branches as they swayed to the melody of the wind, shadows moving delicately over an expanse of gold corn hair and two lost and intermittent children heads in its sea, laughing and squealing

as they went. It was a pure happiness Danny had felt in the past; one that had morphed into but a mere memory he stashed and shelved away at the back of his mind. Little did he know that tears had finally absconded his eyes, streaming onto the shoulder of a chuckling Abel whose arms curled tightly around him,

marking the first time he had cried in a very long time. Danny's hands lifted on their own until they held position on the younger male's back, returning the hug when the droplets had refrained from stopping against his will. “I'm sorry,” he whispered. “I’m sorry.” Abel's voice cracked. “It's okay now.”