Commaful
The Vanilla Ice Cream of My Heart (Part 02) 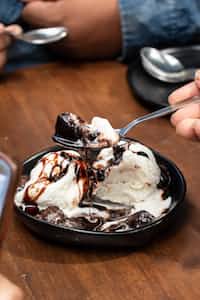 The Vanilla Ice Cream of My Heart (Part 02)

Jared just sit quietly in bed after his family leaves. He come out to his mom and his mom does not believe him, just laugh it off. He pick up his phone and start typing a text for Alan.

He end up sexting Alan that night. Alan seems like as gay as he is, so Jared want to drop by to the ice cream place again tomorrow. He at least going to sleep well tonight thinking of Alan.

The next day he put on his make up and turn himself into Joanie. She told Alan that she would drop by his store today, and since yesterday Alan can't seem to recognize him so he decide to just go in as Joanie.

Joanie is ready to charm Alan with her black dress that looks elegant because she got a date with Alan. Alan promised to take her out on a date. Joanie arrived in Alan's shop around 11 am.

"Joanie!" Alan smiles and hugs her. "Hey.." Joanie kiss Alan's cheeks then clean her lipstick from Alan's cheeks. "Are you ready?" "Yes, I am.." Joanie smiles.

Alan grab Joanie's hips and lead her to his car. Joanie took an uber for the 10 minutes drive because she is not walking that far with high heels.

Alan took her to a Mexican restaurant, their town does not have a lot of fancy restaurants. They order their lunch and Alan hold Joanie's hand while staring at her.

"Why you dress up as Joanie for our date then?" "Because I saw you yesterday and you did not know me. So I figure it will be easier to dress up like the women you flirt with." "So I want to see this man then. I'm bisexual," Alan smiles.

"Oh.." Joanie smiles. "My name is Jared and I am a drag queen called Joanie every Friday night." "I want to see Jared after lunch if you are okay with it." "I'm okay with it. In my place or yours?"

"Let's go to mine. I have some surprise for you.." Alan threw a naughty winks. "I love surprises.." Joanie smiles and kiss Alan's cheeks.

Alan treats Joanie the lunch which is nice even though she wants to pay too. They went back to the ice cream shop. Alan's live in the 2nd floor of the shop.

It took Jared half an hour to take off his make up, Alan have a make up cleaner and face wash. Jared usually took more time to clean it with his regular make up but he is using a lot less make up than he usually is.

He does not really know if Alan would be interested in him without the make up. But he does not want to be Joanie all the time. So he exit the bathroom with a robe that Alan provided.

Alan was busy assembling some desserts for them. "Alan.." Jared calls slowly. Alan turn his head and smiles. "You are the napkins man from yesterday! I kind of wonder where I saw you before! I feel so stupid. I'm sorry.."

"Hey, it's fine. So.." "So, come here! I made you some desserts!" Jared walk and sit in the kitchen counter bar stools. "I never went on a date with someone from the bar before."

"Really? I am so lucky then!" Alan smiles and put the bowl of brownies pieces with chocolate and vanilla ice cream. "This looks delicious!" Jared smiles. "I have a sweet tooth.." "Great! Me too.." Alan smiles and sit next to Jared. He feed Jared a spoonful of his dessert.

"Oh gosh this is delicious!" "Thanks.. You are delicious too.." Alan chuckles.

They spend a few hours chatting about desserts and Alan's store. Alan apparently work in wall street for a few years, paid his student loan and save enough to buy the store then he bailed out. Alan is so passionate about the dessert store.

After talking for a while they make love with each other. Jared has been single for almost 6 months so he is so happy with the sex. Alan is gentle and he is so passionate when he make love. Alan said that he has been single for a few months too and his last lover is a women. They broke it off since Alan is moving away.

Jared had to borrow Alan's clothes before Alan get him to his house. Fortunately they are similar in size, Alan a little bigger than Jared slim figures but not by much.

When they pop out of the stairs connecting from the loft to the store someone calls Jared. It's his brother in laws, George with his two years old son.

Jared whispers to Alan right away that he did not know Jared is gay. Alan opens his mouth but decided against speaking out. Alan knew he barely knows Jared. They walk towards George.

"Hey, what are you doing here?" George ask. "Well, it's a small town. This is my friend Alan. He owns the shop," Jared force a smile. "Oh hey! I'm George, this guy brother in laws. What are you two doing anyway? You did not just went on a date right? Because you are not gay," George chuckles.

Jared sighs. He just force another smile. He knew Alan is angry. "Well, we got to go. See you around," Jared grab Alan's hips. "Hey, you should not touch your man friend like that, don't want you to catch gay bugs.." George chuckles.

Jared just push away Alan. He knew Alan want to explode. He just waves to George and disappear with Alan. Alan was awfully quiet all the way back. Jared invites Alan to come to his place.

"I don't think I can date you, Jared. You are a nice man but I work so hard to be away from a homophobic person like your brother in law." Jared sighs. "I understand. I'm sorry.."

"You have to stand up and cut ties if they can't accept you." "Alan, it's a small town. I can't just cut ties with my family." Alan sighs. "I'm sorry for you then.."

"It's fine. I can still go to your place for ice cream, right?" "Yes, and I really want this to work out differently. But I do not mind being your friend." "Really? I would love that.. Thank you.." "You are a nice man, Jared.." Alan smiles.