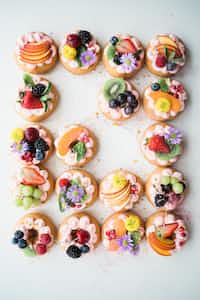 ellierose93131 Mostly on wattpad now - @Ellierose93131
Autoplay OFF   •   7 months ago
Transcript Use Images
Mature, LGBTQ+, Romance | Joe relationship with Leo start to get a little better. Or is it? | Contains - sexual talks & mentions of abuse
romance lgbtqcupcakeseriespillowtalkpillow talkabusealcoholic

Leo went home drunk and now he is laying awake in his bed post coital with a man that he can't recall the name, after the red carpet event. He told Joe to come home without him.

Leo disappointed on Joe's performance as his fake boyfriend. It started with how Joe did not let him lead and then a lot of attention goes to Joe instead of Leo.

As a narcissist, it really angers him. While in some level he knows he is being unreasonable like what Joe said he still hate Joe for stealing his spotlight.

He pushed away the younger man and grab his robes.

He walk out of his bedroom and heading to Joe's bedroom. He saw the man asleep. He walk closer and sit in the bed, he shakes Joe until he wakes up. Leo is still drunk now but started to feel the after effect with his head throbbing, so he need some of Joe's sandwich or pancakes now.

"What?" "Pamcabs! Pam! Cabs!" Leo yells now. He does not realize that his words is just gibberish. Joe chuckles and get out of the bed. He's guessing that Leo wants him to make pancakes.

"Whaddya luffin abutz?" Leo still mumbles nonsensically. "Nothing. You're drunk. I'll make you some pancakes," Joe stands up and heads to kitchen.

He stares at the pantry for a moment. He hates how Leo treating him. But he really needs the money now more than ever.

He stay with Clarine for 19 years for George, he should be able to endure this for a year or so. George should have his basketball scholarship too, so it will be a lot easier for him.

The younger man that Leo bring home comes out from the master bedroom as Joe done cooking pancakes for Leo. His name is Aaron, and he wants pancakes too but Joe refused to make him one.

At least Leo does not insult him every single chance he have and Leo tried to do better. After finishing his pancakes, Leo fall back to sleep. After a few hours of sleep Leo is holding Joe tightly he barely can move. Then Leo starts to screams in agony.

Leo remember everything so clearly like it's just happen. He grab Joe's wrist but Joe hold him while waking him up. "Leo.. Wake up.. It's just a dream.." Joe shakes Leo up. Leo opens his eyes then cries on Joe's chest.

"I'm here for you, Leo.." "He raped me.." Leo keep sobbing. "I understand, but now you are with me and I would never hurt you," Joe kisses Leo's head. He hold him for a while.

"You give me place to stay and you pay me to be with you. So, I am here for you." "But, you'll leave me when I stop paying you?" "I don't know. Probably. I do care about you. But I'm not going to replace my abusive relationship with another one."

"Am I that horrible to you?" "You were saying horrible thing to me because you said I stole your spotlight. You came home drunk with another man again. I know this is fake but you just don't consider my feeling. Ever!" Joe doesn't really know why he got this upset about this. Somehow he got jealous, Joe is falling in love with Leo.

He realizes how stupid it is to fall for another man that will abused him like Clarine.

Leo stares at Joe. "I want to date you for real. No more contract. I'll paid for George collage. I'll stop drinking and sleeping with random man.I'm sorry, I think I am falling in love with you but I pushed you away because I'm scared. I'm scared you will leave me or hurt me."

"So you are not usually that horrible?" Joe rubs Leo's cheeks. "I don't know maybe not so bad but I know Jack has been very patience with me."

"I was with a woman for 19 years. I don't know if I'm a top or a bottom anymore. I think I bottomed a couple of time in the past." "Did you enjoy it? "Barely remember it but I loved the man so I think I enjoy it. It's been almost two decades."

"Are you willing to try it with me?" "You don't want to try bottoming?" "I.. I got nightmares when I did it. I kind of take me back to that abused."

"This is why I'm scared to start this with you. I know I like you but I know we are not sexually compatible." "Leo.. Do you mind to try bottoming for me too? I know this is asking for a lot.."

"No.. It's not. I understand why you ask, and I'll consider it. You are different than any man I ever slept with. You are as wounded as I am.." "Thank you. I never been raped but, I do endure a lot of things."

Leo pulls himself closer to Joe. They kiss gently, they both want this kiss to be more but Joe hesitate. Joe knows that Leo is still hangover and the last thing he wants to do is taking advantage of him. Leo rubs his head to Joe's chest.

"You're still drunk." "It happens a few times when I was nineteen." "The raped?" Leo nods weakly. Joe kisses him on his forehead and rubs his back.

They fall back to sleep. But they waked up by someone beating their bedroom door so hard and screaming Leo's name. Leo mumbles and dragged himself out of the bed.

He opens the door and he saw Jack outside the bedroom door. His guess is either George or the man he bring home last night opened the door for Jack.

"What is it, Jack?" "Are you dating someone else?" Jack looks like he's about to cries. "Yes. But that's none of your business. We are done."

"That's not what you said before!" "I was drunk and lonely. But I have Joe now.." "And Aaron?" Jack points at Aaron that sitting in the bar stool. Aaron waves and smiles.

Joe peeks from behind Leo and tells him that he needs to make breakfast. Joe walk pass by Jack and just nods. "He's old and ugly!" Jack really sounds like a kid now. "Jack.. come on.."

"What?! I'm right!" Jack starts to act like a kid again. "Jack, could you just not do this? This is ridiculous." Jack hugs Leo and not letting him go like a little kid.

"I'm sorry I posted that video. I just want to make money for us. I was.." Jack sobs. "I was planning to use the money to buy you an engagement ring. I want to marry you.. But I don't have any money.."

Leo sighs. He saw Joe looking at him from the kitchen. "Jack let me go.." Leo push Jack away. He walk towards the kitchen and stands next to Joe. "Joe, I'm sorry.."

But Jack pulls Leo away from Joe. "I'm not going to allow you to be with anyone else!" "Jack, it's over. I moved on," Leo pushed away Jack. "I'm sorry. You messed up.."

Jack pulls Leo back and refused to let go. As George comes out of his room. Joe turns off the stove and pulls George away. He ask George to pack his things up.

The last thing Joe wants is to be in the middle of this. He needed the money but this relationship is way to complicated for him. Leo keep calling him but he just ignores it.