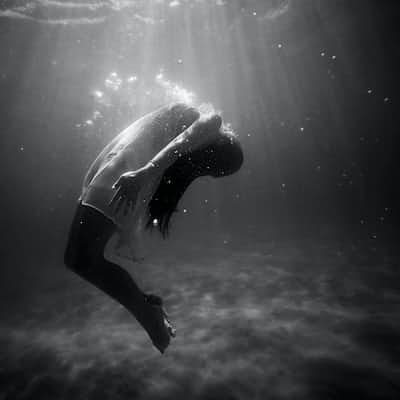 when she saw him for the first time, she felt a flutter in her stomach; like a thousand butterflies unfolding their graceful wings against her skin

like the mid autumn leaves falling slowly and gently to the empty ground, she fell for him

she admired how his hands enclosed hers, so protectively

he held her hand and wrote her a sweet note on a napkin, making her cheeks taint a rosy pink

then he grabbed her by her waist, his touch setting her skin on fire and his lips painting every shade of love on hers

she was so in love and he was too. she would listen to him while holding his hand. she stitched up his torn emotions and taped his broken parts together just so that he would be happy

and then came the time when they argued. he shouted and she cried. it was dark and it was cold; she was lonely

like the stars missing the sun on the morning sky, she missed him. she hated what he did but she couldn't bring herself to hate him

she fell for him even more when he took her to the lakeside and apologised. she nodded and accepted his apology. overwhelmed with happiness, she kissed him. he was hers once again

days and months passed and her love for him deepened. she was so in love with him and he was too or so she thought

he grew distant and one day, he left her without any explanations. unanswered calls and unseen messages made her upset. she longed to hear his voice and inhale his scent

a few weeks passed by and he hadn't called her back or came to visit her. she didn't know where he was or why he left

but one day she found out. she found out the agonising truth about him. it shattered her heart and tore her soul into pieces

her world collapsed under her feet. she fell, for real this time.

she loved him too much. for him, she will do anything. and she did.

she closed her eyes and accepted the nothingness that was about to engulf her. she did something that none would do; she drowned herself to become his anchor