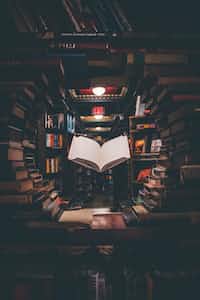 bookishmuggle Dear @deathstruck, you are important
Autoplay OFF   •   a month ago
Transcript Use Images
Chapter 3 of the Inky and Izzy series!
fiction @inkdragoninky and izzyseriesshort storyshortstorydragonfantasydragonscute

Inky and Izzy-Chapter 3 By Mari

Important! If you have not read chapters 1 and 2, go do that! Links in comments!

Previously: Izzy took Inky to school, where he stole a bunch of books and took them home with him. Izzy questioned Inky on how he got his scars. He told her (nonverbally, of course) that it was done by other dragons, and those dragons happened to be looking for him.

The door to her room opened. "Izzy!" her mom exclaimed. "What is this?" she asked, gesturing to the mountain of books on the floor.

Before Izzy could answer, her mom shrieked and pointed to Inky. "WHAT IS THAT?!"

Izzy jumped in front of Inky while he scurried under her bed. "What is what?"

"There was something! Right there!"

"What was there?" Izzy asked innocently.

"It went under your bed!" Her mom pushed past Izzy and peered under her bed. Izzy sucked in a breath. If her mom found Inky, it was all over.

"No, I swear I saw something. It was like a lizard, or a snake." She hadn't found him.

Izzy's mom stood up. "I guess it was nothing." She walked back towards the door and started to leave, but then stopped.

"Oh, I came in here to ask you, who were you talking to? I heard your voice."

"Oh." She remembered her lie from yesterday. "Yes, I was talking to Isaiah. On my phone."

Her mom smiled. "I'm so glad you're making friends." And with that, she closed the door and left.

Izzy sighed and looked under the bed. Inky was clinging to the wooden boards under her mattress. He looked at her quizzically.

He nodded in understanding and let go of the boards.

Izzy stood up and paced her room. "We need a plan. If you're going to stay here, then my mom can't see you ever again."

"You saw her reaction! Also, she's a scientist! If she found out I was hiding a dragon in my room, she would take you to her lab and... I don't want to think about it. But it wouldn't be good."

"And we need to get these books cleaned up."

He jumped to the top of his pile and hissed.

Ten minutes later, Inky was sitting on Izzy's bed and gorging himself on chocolate, while Izzy cleaned up the books.

"You are so manipulative," she grumbled.

"Ok," she said once all the books were back on the shelves. "We need to figure out some rules. First of all, no more piling my books."

He made a "gimme" motion.

"Ugh, fine. Twenty. And I'm not going any higher."

"Also, you can't stay here while I'm at school. You have to come with me every day. I don't want my mom to find you."

"You're going to do your business in this bag." She held up a plastic grocery bag.

"And you have to eat things other than chocolate."

"Chocolate isn't good for you."

He continued eating his bar and shrugged.

"I'm going to get you some healthier food."

Izzy went downstairs to the kitchen. What did dragons eat?

She piled lettuce, leftover steak, and a peanut butter and jelly sandwich onto a plate. Best to have variety.

"Inky," she said as she opened the door to her room. "I brought you something." Her eyes glanced upwards. "Inky!" she exclaimed.

The dragon was snuggled under the covers of her bed. He looked very content.

Inky sniffed the lettuce and wrinkled his nose.

"Look, I didn't know what dragons ate. Just try it." Izzy sighed and sat on the opposite side of the bed. She googled "what do dragons eat".

All that popped up were links on how to feed a dragon in Minecraft.

She put her phone down and checked on Inky. The peanut butter and jelly sandwich and the steak were gone. The lettuce was untouched.

"Come on, did you even try it?" she protested.

Inky stuck out his tongue and shook his head.

"Vegetables are good for you!"

Inky pushed the plate away.

Izzy picked up a piece and dangled it in front of his face. "Just one bite."

Inky snatched it out of her hand and threw it at the opposite wall. The other pieces soon followed. He scrambled off the bed and grabbed a chocolate wrapper from earlier and held it up.

"No, I'm not getting you more chocolate!"

Inky glared at her and curled up into a ball in the corner. He clearly was not happy.

But what did she have to compare him to? It wasn't like she had seen any other dragons before.

She typed "dragons" into safari on her phone. The first link was a news article, published earlier today, with a headline that said "Dragon spotting in Michigan".

Michigan? She lived in Illinois, not too far from Michigan. She clicked on it.

"Man claims to have spotted a pack of dragons flying over his house at approximately 1 AM. A picture of one of the supposed dragons is shown below," the article read.

Izzy scrolled. It was a blurry picture of the night sky, the moon a shining beacon. But there was a dark silhouette in the center of the moon.

It was much too large to be a bird or a bug or a bat. Its jagged wings were spread out on either side, and it had a tail that was nearly as long as its torso.

Izzy thought she could see the outline of horns sticking out from its head.

But with the knowledge she now had... it was very possible that the photo was real.

"Alright, Inky, you ready to go to school?" Izzy asked, holding her open backpack for him to jump into.

He hopped in and nodded. Izzy zipped up the bag, grabbed a bagel, and ran to the bus waiting outside her house.

As she walked down the bus aisle, she heard whispers of dragons. She tensed. Did they know?

She took her seat next to Comic Book Boy. "What are they talking about?" she asked him.

He looked up from his book. "Oh, you don't know? There's been a supposed dragon spotting."

Izzy breathed a sigh of relief. "Oh, yeah, the one in Michigan? I saw something about that yesterday-"

"No," he interrupted. "There's been another one. This morning, in Illinois. Just a few hours away from here."

The sighting took place at 6 AM in a field. A farmer had snapped a picture of something large and red curled up in the grass. It was from pretty far away; at least 100 yards. Izzy zoomed in.

She could see large white horns and a long tail, and in the background, several more dozing dragons of various colors.

Izzy blinked and handed him back his phone. "That's crazy."

"You have a dragon. He's in your backpack right now. This news article couldn't have come as a shock to you."

"What?" Izzy didn't have to fake her surprise. She was shocked that he had managed to figure it out. "Why would you think that?"

"Well, you're always talking to your backpack. And I've seen him pop his head out during class a few times. Wait, it's a him, right?"

Izzy glared at him. "I don't know what you're talking about."

Comic Book Boy sat back in his seat. "Ok, fine. Go ahead and play dumb."

They said nothing else for the rest of the ride to school.

Izzy heard of nothing else except the dragon sightings for the entire school day. Every time she heard someone talking about it, the knot of nerves in her stomach grew tighter and tighter.

The man from the last article had seen a pack of dragons. They were in Michigan. But now they were in Illinois, where she lived. It seemed like too much of a coincidence.

The dragons knew where Inky was.

Is it super late? Yes. Would I have finished this earlier if I had just wrote instead of re-watching Dear Evan Hansen? Also yes. Do I care? Not really. I hope you guys liked it! If you want me to add you to my notify list, let me know! -Mari <3