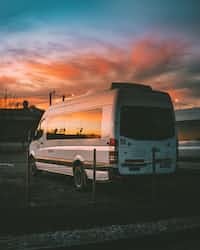 angelina_story Om Namah Shivay A 13 year old writing...
Autoplay OFF   •   a month ago
Transcript Use Images
Short story! Dream of a van made him a rich man. Want to know how? Read the story to know!
thoughts vanvan for a chance to be showcased in this section tomorrow!me_angelinasugar cane/crafts

There lived a small boy named Rahul in a small village of Mandalay. He was very poor and couldn't afford for a school. His father was a rickshaw driver. He would always take Rahul with him.

One day, while returning home, Rahul for the first time saw a van. He asked his father, ' Papa, what is this?' His father replied, 'This is a van.

Just like we drive rickshaw, people who have a bit more money, buy this.'

Rahul in his dream saw he was driving a van and his father was sitting back of him...

The Next morning, Rahul decided to save money for a van. After an year, Rahul could collect only 100 rupees. So he decided to work to save more money.

He went to his field of sugarcane and took some. He sat out of his house and started selling them at the rupees of 5 each. So many people bought it...

By this year he had an income of 2000. He still wanted more so he also stared making crafts of wood and sold them for rupees 10 along with sugarcane of rupees 5.

His crafts were very beautiful and so he got more income, minimum 200 rupees per day! By the end of this year he had an income of rupees 10,000. Can you imagine!

He went to the town, got a beautiful house for himself, got a van and a beautiful big car.

Now he also started a company of 'Handmade Crafts'. Many good labourers worked under him.

His dream made him a rich man.

Thanks for watching :) Hope you liked