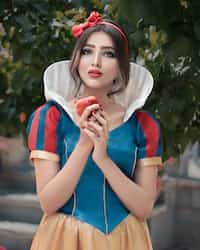 angelina_story Om Namah Shivay A 13 year old writing...
Autoplay OFF   •   25 days ago
Transcript Use Images
Story of Mary who loved her step-mother and step sister even though they were very rude to her.
feelings me_angelinamaryrudelove

Once upon a time there lived a beautiful girl named Mary. She had blue eyes, long silky black hairs and was fair just like snow.

She lived with her father, step-mother and two step- sisters in the town, Miscondia. She was a kind and loved helping everyone, rich or poor.

One morning when she woke up, she saw no one around. He went downstairs to the hall and saw a crowd weeping. She asked one of the lady about their sorrow.

The lady asked her to just move forward. She went forward and saw her father lying there on the floor wrapped in a white cloth.

Her step-mother said her father had expired at night while sleeping. Poor Mary sat there and crying a lot.

When her father's body was taken to burn, Mary noticed a wicked smile on her step mother and step-sisters face. She did not understand why...

Slowly as the time passed, their behavior towards Mary changed. They made Mary do all the works.

Mary had to get up early in the morning and sweep the whole house, make the breakfast, serve breakfast, wash dishes, wash clothes, dry the clothes, clean the garden,

make dinner, serve dinner, light the fire, get the beds ready to sleep, clean the shoes and at last, tired goes to sleep. This was her daily routine.

One day, while she was cleaning the garden, the prince of the town passed her house. He saw Mary and immediately fell in love with her and wanted to marry her. Mary also wanted to marry him.

At night, when Mary was going to sleep, the step sisters called her in their room asked her to put oil in their head.

While she was putting the oil they said that they love the prince and marry him so they asked her to stayaway from him. Mary felt very sad.

The next day the prince came to her and asked her to marry. Mary denied him saying, 'I also love you and want to marry you but I cannot because my sisters love you and they wish to marry you.

' The prince said he will not marry anyone other than Mary. But Mary denied and went away. The prince learnt the whole story of Mary and was very angry at her step mother and step-sister.

And gave them punishment of prison for 1 year. He married Mary after that and they lived happily ever after.