Commaful
A Story That Should've Been Forgotten 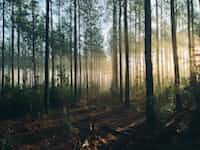 anathemast Community member
Autoplay OFF   •   3 months ago
Transcript Use Images
Anathema has been seeing figures in the forest for years now, but she always associated them with the helpless and homeless. Its much, much darker than that, my naive child.
thriller anathemahorrordarkshortscary

A Story That Should've Been Forgotten

I dreamed I was running through the forest, my clothes getting tugged on by the sorrowful branches of the trees, pleading for me to stop.

I wasn't sure why I was running, I just knew I couldn't stop. My breath was heavy and shallow as I gasped for more air, my body begging for a break but my mind not allowing it.

I continued to run, the forest looking as if it would never end. I turned my head to look at what I was trying to escape, immediately recalling the figure that was sprinting after me.

It was a tall creature, it's nails long and cracked. It's eyes dripped with an unknown, black substance, it's body starved and weak.

It opened its mouth wide, decaying teeth showing themselves as it screamed for me. The same black substance resided in its mouth. It was unsettling.

I continued to run, but it's screams only continued. With each step, they got louder and louder. I wasn't sure how much longer I could run, my body almost dropping upon each lunge.

I needed to get away, to get home to my mother. The creature continued it's horrid screams at me, the pitch making my ears ring.

I ran with as much stamina as I had left, seeing my house appear in the distance. I reached my hand out, hope rising in me.

As I ran, I tripped on a tree root that was peeking itself out of the ground. I hit the ground, my eyes beginning to water as I turned behind me, facing the identity.

There the creature stood over me, the liquid coming out of its mouth falling onto me. It crouched, getting close to my face as my body quivered.

Even though this thing was weak, I felt frozen and unable to do anything to defend myself.

It reached its hand out, holding my face the same way a mother would hold her child in the most endearing way.

I wanted to scream, to cry out for someone to come save me from whatever doom was about to impend on me, but I couldn't.

The words were caught in my throat, attempting over and over to escape, but to no avail. My eyes could only water as the creature opened its mouth into a wide grin. It only spoke one word.

I awoke, sweating and out of breath. My mother stood at the side of my bed, a concerned expression presented on her face.

"Anathema, are you okay? You're shaking."

I looked down at my hands as they shook, trying to process that it was all a dream.

The horrors of what I felt I had just experienced were still lingering in the back of my mind, the creature's face haunting me.

I looked over to my mom, trying to still catch my breath and calm down.

She gave me a worried smile as she held my face lovingly. She was often the calmness to the tide.

"Alright, honey. If anything's bothering you, you let me know, okay? I love you."

I smiled as she looked at me with care.

With that, she walked out of my room. I stared at the wall in front of me for moments, trying to recall the entire dream. I had so many questions as to what that dream was about.

I peered back out my window, still entranced by the forest.

I looked for any detail that was out of the ordinary; things moving in odd ways, people far off in the distance, and even the direction that creatures were running.

I was hoping to catch something, anything, that would help give me a better clue as to what was going on.

I stared out of my window for at least an hour, hoping, praying something would exit from the forest; but nothing did.

I sighed, pulling the same burgundy flower I had put into my pocket earlier out. Its colors started to fade, as did my hope for a new story.

My mother yelled from the bottom of the stairs, letting me know she was going to head to the market.

The market was at least 30 minutes away by car, given we were living in the middle of nowhere. Even though we were decently far out from civilization, I enjoyed it.

There was no bustling city life, no people to judge me. I was safe here, curled up in my bedroom next to my typewriter. This was all I had known.

I looked away from the window, yelling back an 'okay' to my mom. I could hear the jangling of her keys as she opened the door and left, heading to her car to leave me for over an hour.

Even though it was lonely when she left, it was also comforting. I liked being alone.

I redirected my gaze back outside of my window, sighing as nothing had changed. I was silly to think anyone would be residing in that forest, especially creatures that were unbeknownst to man.

I was as childish as I had been years earlier.

As I turned away from the window, I caught a glimpse of movement. I sat frozen for a minute as I felt anxiety rise up in me. I turned back to the forest, seeing someone this time.

I opened my window to get a better look, squinting at the identity. It was a boy who seemed to have a scar on the side of his face connected to his mouth.

He looked very normal, not like the rest of the creatures that I had seen moving swiftly between the trees. He seemed to notice me, looking in my direction.

Our eyes met as he smiled, my heart dropping. I hadn't seen other people in years, especially not a guy. Mother was always so cautious of me meeting men. She thought they were bad luck.

He lifted his hand and waved in my direction before continuing on his walk. My heart was racing. I had to talk to him.

I threw on a sweater, shoving my feet into my shoes as I ran out the back door. I ran through the dozens of flowers that lined themselves in the garden as I ran towards the dark trees.

I didn't take in the scenery nor the risks of this decision, I only knew I had to do it.

I could see his figure get farther into the forest as I ran, hoping he wouldn't go far or disappear like the rest.

This was my chance to finally interact with someone and maybe get the answers I so desperately longed for. I opened my mouth, losing my breath as I ran but still able to yell.

To be honest, I felt embarrassed yelling at a stranger like this. If he had nothing to do with any of this, I would be getting out of my comfort zone for no reason right now.

I could be inside, drinking hot chocolate and writing my story, yet I was in the forest, chasing a boy.

This scenario reminded me of my mother, who chased after a man who left her and no longer loved her. Of course, that would just be an analogy, given I had no feelings for this man whatsoever.

I was chasing him only to obtain information.

He turned his head to me, looking at me in confusion. My eyes immediately met his again, but I realized something different this time.

His eyes were a pink color, the most beautiful pigment I had ever seen in someone's orbs. It was breathtaking.

I stopped in front of him, trying to catch my breath for a second before I attempted the conversation I wanted to have. He waited, patiently, for me to collect myself.

"I hope I didn't catch you at a bad time. My name is Anathema. I saw you walking out here and wondered why you would be hanging out in such a deserted place.

Not that there's anything wrong with that, I was just curious. People usually don't come by here."

He took his time to answer, examining me from head to toe.

"Oh, I was only just taking a stroll. I live deeper in the forest and have never seen the outside of it. Honestly, I was just curious as to where it all ended."

He paused for a moment, a heavy awkwardness settling in the air. I wasn't sure how to respond or what to say. He spoke again.

"I wasn't expecting to meet anyone on the other side, especially not a cute girl."

My face turned red, heating up as I processed what he had said. I had never been complimented like this before. I took a deep breath and pulled together my composure.

Only a naive girl would fall for such charming tricks.

"I saw someone in the forest the other day. I was wondering if you saw them, too? It caught me so off guard; I thought we lived secluded back here. There's rarely anyone who comes by."

He pondered for a moment, looking up at the trees' soft leaves. I felt awkward as he sat in silence, thinking maybe I should just walk away and forget this conversation even happened.

If he had remembered people coming by, his response wouldn't take so long. I rubbed my arm, the softness of my sweater being the only comfort I had. He answered slowly.

"Yeah, I think I did. I thought I had just imagined them, though. If it was a person, they were very odd looking."

My heart leaped out of my chest with excitement. He had seen it, too! I smiled at him, my enthusiasm seeming to make him smile in return. I continued the conversation.

"I'm a writer and I wanted to write a story on whatever I had seen. It seemed so abnormal, but yet so intriguing."

I wasn't only just excited because I had confirmation of my sighting, but also because I had finally been able to meet another person.

After all of these years of seclusion, company from someone other than my mother was refreshing. I thought this would be a draining experience for me, but it wasn't.

I turned my head as I heard the sound of my mother's rough tires rolling down the road. I looked back at the man as I started to walk back to the house. I spoke quickly.

The boy nodded at me as I ran.

"See you then, Anathema."

I smiled and waved as I ran back to the house. As my mom pulled into the driveway, I looked back at the man I had just met. However, this time his attention wasn't directed at me nor the forest.

It was focused on my mother's car.