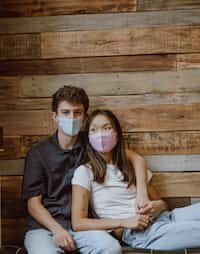 amy_romance5 Community member
Autoplay OFF   •   a month ago
Transcript
Sometimes love isn't what it appears to be. Sometimes there's no happily ever after or happy for now. Sometimes it's just love that doesn't last for some reason. That's what my story is about. The love that I never got to live through. He was my everything. He was my life. And I never realized it until I had to say goodbye.
romance romancelovedeathsadcoronaviruscorona virusmaskshospitalparty

Sometimes love isn't what it appears to be. Sometimes there's no happily ever after or happy for now. Sometimes it's just love that doesn't last for some reason. That's what my story is about.

The love that I never got to live through. He was my everything. He was my life. And I never realized it until I had to say goodbye.

"come on have some fun!" Bella shouted over the loud metallic music. I stepped over an emptied glass of vodka on the floor, scanning around the room.

The lights were red, and people were everywhere, dancing or making out. Bella was my best friend. We had known eachother since we were 7 years old.

We were at a party- one that Bella had dragged me into going to.

It was where I met Danny for the first time. We played truth or dare with a large group of people I had never met before.

"I'm going to the toilet, I'll be back soon ok?" Bella reassured me. She saw me looking at Danny, and winked as she left.

Then, the two people who were next to Bella left, stumbling over drunks sleeping on the floor and empty bottles of alcohol. This was honestly like my worst nightmare.

I was left there, with Danny who was now looking at me. He walked over to my sofa and sat next to me.

"You know, I haven't seen you drink all night" He said, breaking the very awkward silence. Awkward for me anyway.

"Yeah well I don't drink" I replied. I wasn't lying. I didn't drink.

"come on, I won't tell anyone, just take a sip" He persuaded, passing me the bottle of vodka he had in his hand.

This night couldn't really get any worse, so I just took the bottle and took a big gulp. It burned as it slid down my throat. I scrunched my face as the bitterness of it touched my tongue.

It was almost disgusting, but after I drank it I suddenly felt all bubbly and warm. I took the bottle and took another large gulp, this one bigger than the first.

I smiled as the warmth filled my body, overpowering the strange, burning taste in my mouth.

"I like your shirt" I blurted out. I felt as though this was more the vodka talking than me. He looked down at his plain white t-shirt.

"But, there's nothing on it" He smiled. I suddenly realized what I had said. I was never drinking again.

"Exactly" I said, placing my finger on his chest. He started laughing, and the took a big swig from the bottle of vodka he had given me to drink.

"I didn't catch your name?" He said. By now, the liquor had taken control of me, and I blurted out,

"That's because I didn't throw it" I said. He started laughing again, but this time I laughed with him, even though I didn't see what was funny.

"It's Emily" I said, suddenly realizing what he meant. I'm not sure how I didn't see that. The vodka had really begun to control what I was thinking.

I took the bottle from him and took another big drink.

"Well... Hello Emily" He smiled. I stared at him. His beautiful, god like face, and his muscly chest. I didn't know it was possible to have a nine pack.

That was 5 months ago. He became my best friend. Until we were put into lockdown for coronavirus.

I sat on my bed, looking up at the ceiling. I missed Danny. I wasn't that scared of corona, but I had asthma so I had to be careful. I don't think anyone my age was worried about corona.

I suddenly jumped as I heard a banging noise on my bedroom window. It was now 11:15pm so I had no idea who would be outside me bedroom window at these hours.

I suddenly got really scared, and went to pick up a baseball bat in the corner of my room before going to see who or what was at my window.

To my surprise, behind the window was a familiar face, smiling at me. Danny. I smiled back, enjoying the fact he came all this way to see me.

I opened the window for him and he walked into my room and sat on my bed. I went to sit down next to him.

Before I could say or do anything though, he pulled me towards him and kissed me, not letting go. I kissed back, my entire body going warm with his touch. It was the first time we kissed.

He came to see me every day at the same time by my bedroom window. We would talk, and one time we even got drunk together and he accidentally spent the night.

He woke up in my bed and had to stumble out the window before my mother came in.

I miss those days. I wish I could relive them. I caught coronavirus somewhere along the way. My asthma couldn't take it. That's what led me here. In a hospital bed in the intensive care unit.

They won't let anyone visit. I cry myself to sleep sometimes. I know it's bad to not miss your own mother, but I wish Danny were here right now.

I hear a knock at the door and look up from my bed, making me cough. I see a tall figure with a black mop of hair and a mask walk in.

They're wearing a doctors uniform, but I know immediately it's not a doctor who's in my room. It's Danny. I start to cry. I can't help it. I haven't seen anyone I love in 3 months.

He takes his mask off and smiles at me. I look up to his sweet face to see he's crying. This only makes me cry even more. I have never seen him even shed a tear before.

"Put your mask back on" I say weakly. My throat is sore and my voice is hoarse. He shakes his head through tears.

"No" He cries and walks over to my bed. I look away. I can't look at him right now, mostly because I know why he's crying. I won't make it. I know. I've been told.

"I like your shirt" He manages to say. I look down at my plain white hospital gowns.

"But... there's nothing on it" I cry, realizing why he's saying this. I remember that day at the party when I said the same drunken statement to him.

"Exactly" He sobs. I can't see him like this, but I look towards him for the first time to see his red, puffy eyes. He has been crying alot, I can tell.

"You know people die twice. The first, when they die. And the second, when the last person says their name. Emily Smith I will never stop saying your name.

I will whisper your name in my sleep, I will shout your name when I go to places and I will say your name on my deathbed. Emily Smith will be my last word, because I love you" He weeps.

"Then I will save a seat for you. I will put you on the guest list. I will never forget you" He smiles under the tears streaming down his cheeks.

Those words ring in my head as I struggle to breathe. I was once asked if I believed in god, and I said no.

I'm not changing my entire faith at this moment, but I think it's fate that I'm starting to die as my one true love says goodbye.

"I love you too" I say, forgetting that he told me he loved me for the first time. "I don't want to die" I add. I can't take it. There are so many things I haven't done.

He presses his lips against mine for the last time.

"Your not dying, Em, not until I say you are. Stay with me, please" He shouts. I can't hear him though. My ears are ringing. I know at this moment, I'm dying, but somehow I'm at peace.

I'm not fighting to survive, and I know that's a battle I won't win, so I just close my eyes and say softly and through tears,