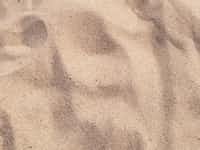 I was the last to leave.

I slept after some long days.

I hit the third "z" as soon as I counted the first sheep.

I woke up on a beach after too short of a sleep.

I looked back and forth between the sea and the shore.

The sea was like a squared river Niles and the shore a silky desert.

I thought I saw a white island on the furthest end of the sea.

Turned out it was just clouds.

The sea reminded me of the time I almost drowned in a pool.

I was the first to leave that pool—lifted up by the lifeguard.

The sand reminded me of the time I made a sand angel in a sandbox.

I was the last to leave that sandbox—pinned down by the bucket and shovel I put on myself to not get in the way of other kids and more importantly, me making my sand angel.

"I liked that sand angel." I thought to myself as I walked toward the desert.

I did not get to walk for long before it got darker.

In the dark, somehow I saw some glistening white light.

It was an hourglass buried in the sand. To be accurate, it was the sand in the hourglass shining.

I picked it up, and the sand started to fall.

As it fall, the sand's light went out—like when your finger fall on the bottom of the lightswitch.

And I could not see it anymore.

The dark then went on and got darker—darker than it was before I found the hourglass.

I tried to flip the hourglass.

It felt like the whole universe and gravity did a 180 degree backflip along with it like the desert was the trampoline they were trying to land on.

And so the desert flipped, the hourglass flipped, the sand flipped. The light switch of the sand, however, did not flip back on.

And so the sky flipped, the cloud flipped, and the sea flipped...the sea? I almost forgot about the sea.

My remembering of the sea was followed by an even stronger reminder of it; my feet felt wet.

The memory of me drowning came flooding in as soon as the sea rise above my pinky toe.

I dropped the hourglass and ran, but as soon as the hour glass hit the sand of the desert...

I was submerged in the sea.

I tried to swam up and up, but the only thing that went up was the hourglass.

It float on its side, almost aligning with the surface of the water I couldn't see.

I woke up above a cloud.

How I wished the cloud was the white island I thought I saw.

I wished it was an island full of white shiny sand.

I looked back and forth.

neither did I see any sand.