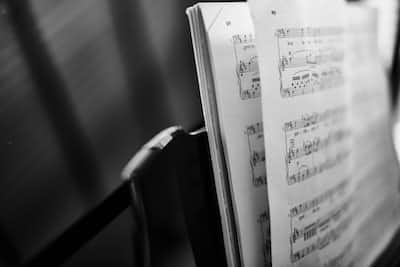 Love at first sight is a funny thing

Some people believe in it, others don't

I never did, but maybe that's because I didn't truly see him until the one day that I suddenly did

I'd never noticed him before

Evan was the quiet kid in my math class, timid and shy

Always had a pair of headphones

That was the first thing I noticed about him

He always had his homework on time

I asked him for notes, once

He gave them to me without a second thought

The second thing I noticed about him was his handwriting

Each line so bold and deliberate, it looked like a font

All written in pen, not a single mistake

I'd never seen Evan display confidence in anything

But his writing screamed it

He always took his notes with his headphones in

The third thing I noticed about him, the first time I really NOTICED him

Happened after school one day

I was walking to the choir room, where I'd forgotten my notebook

When suddenly, I heard something from a practice room

A slow, sad melody drifting from one of the old, crappy pianos

The most beautiful sound I'd ever heard anything make

Until he started singing

God, that boy could sing

I could've listened to him for hours

The clatter made all sounds stop

For a moment, the entire room was silent, poised

And then he started to play again

But not the same song, now that he knew he had an audience

The one was fast, loud, but still gorgeous

I peered my head around the door, and was shocked by what I saw

I hadn't expected it to be Evan, of all people, performing like that

The new song he way playing was gorgeous, but he was more so

Unlike the last song, which was slow and heartbreakingly sweet

His entire body was moving to the music, words pouring from his mouth, fingers flying across the keys

In that moment, he was the most beautiful creature I'd ever seen

He once asked me if it was love at first sight

It wasn't, for me

Evan was my love at first song

When he starts to play I drop everything to listen

I fell in love with Evan in his element, how he is when he's baring his soul to the world

But the reason I'm still with him, six years later?

It's not just because he's talented

It's because Evan hates solos

He loves it when we sing in harmony

He refuses to be his best self unless I'm mine

And most of all, it's because he's still that shy kid around everyone else

But when he's with me, its like he's still got his headphones on

And I'm his favorite song

Because he's the hottest new artist and I'm his wife

And they ask me if it was love at first sight

I just smile and nod

Because I don't expect them to understand

I do love Evan for his passion and his talent

He is terribly handsome and unfairly talented

But I love my Evan for his soul

For who he was, who he is, and who he has the potential to be

And because when his songs come on the radio

He always asks me to sing harmony