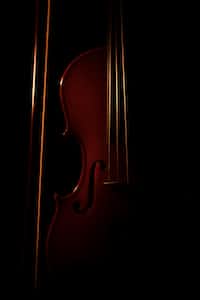 aidaneriol Community member
Autoplay OFF   •   a month ago
Transcript Use Images
His first memory was watching him play violin.
thriller horrordreamsillusionblood

The sound of strings beckoned him through the corridors. The dogs flanked him. They took their nanny duties very seriously. One of them started to grumble, only to be quickly shushed. Head lowered, the dog continued to follow, but this time without complaining.

Music flowed in a soft melody out the crack in the library door. Garrison pushed away with the other dog, who was trying to shove his slender snout through the opening. He leaned close, squeezed one eye shut to better focus on the room beyond.

Inside, he could see Emily sitting on one of the ottomans, eyes closed and chin on her palm. There was a sweet smile on her face. It looked like the smiles his parents wore when they looked at each other.

/Love/, said a voice that wasn't his, somewhere deep inside. Garrison leaned a little to the side to see a hand holding the neck of a violin. It was easy to identify as his brother's hand.

Large and pretty, long fingers with immaculate polish he recognized as Gunner's work. It was a little grown out, meaning they hadn't seen each other in at least a month. Garrison's own polish had been picked off since then. He leaned closer.

One of the dogs was tired of waiting. He pushed Garrison, who lost his balance and fell into the door. He hit his head on the wood, falling to his knees. He whimpered, starting to sniffle, his eyes tearing up. He didn't want to look like a big baby in front of his brother.

"Whoa, hey, bud. Are you okay?" Chandler took the violin from the space under his chin, coming to kneel in front of Garrison. He put down the instrument to cup his little brother's wet cheeks in his gentle hands. "That's a good bump. You sure you don't want some ice or something?"

Kind thumbs brushed away the tears that so callously betrayed Garrison. His dark eyes were cast wide into Chandler's soft blue gaze. He pulled his lips into a tight line. Stubbornly, Garrison chirped, "No way! I wanna listen too!"

Emily smiled as Chandler huffed in hopeless amusement. Those same gentle hands seamlessly shifted to scoop Garrison up, propped on his hip. "You're a tough little cookie, huh? Alright, I'll play for you, too. You wanna sit with Em?"

Garrison nodded so quickly that his teeth clacked. Chandler laughed. He kissed him on the cheek, just as noisy as Gunner always did, and Garrison couldn't help grinning. He smeared his cheek with a giggle, set down beside Emily. He scooted close to her, taking her hand. She kissed his head as well.

Chandler picked up the abandoned violin once more. He propped it under his chin, lifted the bow. Walking back to them, he pulled beautiful notes from the seesaw motion of his hand. He played with his eyes closed, like he was lost in the music, like he was just an extension of the sound.

They sat and listened for a while in comfortable quiet. The dogs laid at Garrison and Emily's feet, snoozing gently. Each note from Chandler flowed indiscriminately, transitioning fluid as a river. That feeling of love created in his chest, so full and encompassing, it was almost too much.

Something wet touched his hand. He thought maybe Emily was crying. Without looking away from his brother, he rubbed her knuckles with his little thumb. It slid and circled with slick efficiency.

This wasn't right. She hadn't cried. Garrison looked up at her. He shrieked. His instinct was to rip his hand away, to lurch away, to gain ground, but she held fast.

She was looking down at him, skin sloughing from her face in thick clumps. Blood ran from her freely, but when she blinked it flew. Then her eyelids came off and her grey eyes stared glassily at him.

She didn't say anything. She didn't make a sound. Behind him, the violin played on.

His wrist was held fast by this monstrous mimic. He tried to pry free, but her fingers were as immovable as stone. Garrison's head whipped to Chandler, to weep and plead for his help.

The violin was gone.

The notes now came from the tendons of Chandler's wrist. His eyes were still closed, still absorbed in the melody that came from the strings.

The bow was a razor now, adopting that same up-across-down motion. His eyes drifted open. The sockets were gouged. There was nothing left inside to look back at him.

Garrison couldn't hear the music over his own screaming. Chandler winked when he brought the song into the upbeat melody of ABBA. The tendons frayed. The notes were discordant.

Blood was up to his knees.

Little Garrison wailed, shutting his eyes tight to the horrors that were surrounding him. He could hear the dogs yelp, their claws skittering away down the hardwood hallways.

Cold breath panted down his neck. The broken notes were just in front of him. He didn't want to open his eyes.

He did. Ragged holes stared back, inches away.

"How are you going to fix this," Chandler's voice gargled.

/Wake up, Puck/, called the voice inside.