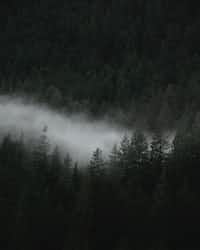 Fear fluttered in the traveler's burning chest as the sun sank lower behind the canopy of leaves.

Two naiads had already tried to kill her with the sun blazing in the sky.

No telling what might happen in the clandestine cover of the night's shadows.

Her footsteps kept time to the

Her footsteps kept time to the beat

Her footsteps kept time to the beat beat

Her footsteps kept time to the beat beat beating

And then the shush

And then the shush shush

Night sounds swelled up around her as she approached the softly swirling water.

"What are you doing here Aegea?"

The traveller named Aegea spun around, searching for the owner of the voice.

With a quick head turn downwards, Aegea saw the speaker was actually a small naiad child with a head of pale, grass-like hair and two eyes completely swallowed by the pupils.

"Why don't you want to kill me? I'm starting to think I might deserve it."

"Listen, I might look like a child, but I am as ancient as these waters. I carved out the river depths with my hands and filled them with my tears.

"Don't believe me? The ruts in the walls have my fingerprints on them.

"I existed eons before you took your first breath and will continue eons after you take your last.

My sisters mourn for their creatures and their plants, but after all I've seen,

My sisters mourn for their creatures and their plants, but after all I've seen, I mourn for you.

"Humanity is its own foil,

"Humanity is its own foil, Its own enemy,

"Humanity is its own foil, Its own enemy, And its own demise."

The traveller took stuttering steps away from the naiad then broke away from her inhuman stare.

She sprinted along the riverside, following its turns until the ground and water dropped off into a crashing, roaring waterfall.

Aegea peered over the edge, felt the heavy, suffocating air around her, then tensed her legs in anticipation of her last jump.

Suddenly, a small, steel-strong hand grabbed her forearm and with surprising strength pulled her away from the edge.

"There is enough self-sabotage in this world without you joining in, too."

The naiad offered her last piece of advice before letting the traveller go.

"Right the imbalance. Save the irises.

"Right the imbalance. Save the irises. Save yourself."