Commaful
The Unicorn in the Night 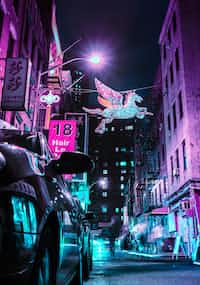 The Unicorn in the Night

"I think you've killed a unicorn," Alice shrieked. I had.

"A fucking unicorn," she continued to shriek.

"A fucking unicorn," I replied morosely.

"Why did you kill a fucking unicorn?"

"I didn't fucking mean to. I didn't wake up today and think 'yeah fuck that mythical creature in particular'. It just fucking happened," I pleaded.

"Well apparently to me it does," I conceded and looked away from the rather mushy corpse of the unicorn and back at my car. "Well its fucking fucked my car as well. Shit.

What are you doing?" I asked Alice.

"I'm checking it's a real unicorn," she said this as if it were obvious. It looked like she was trying to pry its horn off.

"Because you're an expert in the field yes? Look its blood is glowing silver, I think it might just be a fucking unicorn."

"You betcha sweet ass it is," came a voice with a thick New York accent.

See that's my boss's unicorn and as you mighta noticed they aint easy to come by so uh, you gotta come with me now and make amends."

"Are you alone?" I asked the fucking goblin.

"Well yeah-" began the fucking goblin and I punted it off the side of the road.

"Come on let's go!" I yelled at Alice and we ran back into the car to drive off. As her face began morphing into a strawberry, I swore I would never do acid again.