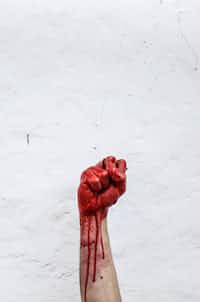 Get Yer Heads Out Yer Asses

Have you ever heard the sound of 66 million people pulling their heads out of their arses? No? I'm not surprised. It doesn't happen often. Its quite impressive though.

That almighty pop when people are fed up with eating shit constantly. It's a thunderclap. The sound that heralds an avalanche.

So sudden and powerful it shakes the halls of power to their very foundations.

That's not the end though no matter how much the powerful might wish it. The secrets out of the bag.

Heads are out of the arses, and its quite tricky to get them back in for obvious anatomic reasons, but also because once people aren't eating shit their mouths are free to ask questions.

Questions like why have you been letting us eat shit for so long?

Of course the powerful can't answer this in a way that makes them look good, mainly because there is no good reason to make someone eat shit. So, they have to bend the truth.

"Didn't you enjoy eating shit?" they say. "Wasn't it warm, cosy, and safe having your head up your arse?"

"Why don't you try it?" comes the reply. There's no coming back for them when enough people ask that.