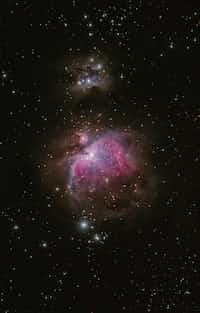 aaronramos Sci-Fi and Horror writer
Autoplay OFF   •   3 days ago
Transcript Use Images
A ship filled with solders ready for war get's recalled for something terrifyingly more important.
thriller scifisci-fiwarspacemarssciencefictionscience fiction

Chapter -1 The long yawn, as the crew like to call the sound the ship makes when it begins departure, fills the air as the 80 giga-ton carrier UEFS Emilia begins its acceleration away from Mars, and gravity and inertia tug at the massive vessel’s being.

Having arrived only 48 hours ago, confusion fills its hull as to why a year-long voyage to supply troops to and hopefully end a recent uprising on the Martian colony results in picking up troops and heading back home without ever touching the surface.

Deck 12-1A 3211 9-16 13:45 “That will be all men! Dismissed!” "That's bullshit, we just got here and they are calling us all back? You guys have been handling the shit here for more than two years, you finally get some support, and now we all gotta go back. Not to mention I am not too happy at all about going back into cryo. Fuck! Never even fired a shot... Double fuck!"

"Shut up private, you should be thankful you had no part in the bullshit that's been going on down here.” “Forgive the disrespect corporal, but fuck you man, I didn’t sign up to spend my life a fucking space popsicle.” “The two of you, knock it off. Orders are orders. Stash your gear and enjoy a last meal, we begin cryo prep in 50.” “If we are all going back, then something big must have hit us... Something bigger than what’s going on here on Mars.”

Bridge 3211 9-16 14:24 “Course set for Earth, maximum velocity in 80 hours, ETA 7490 hours.” “Roger, Electromagnetic shields currently at 67%, maximum potential in 6 hours. “Roger” “What the fuck, really, what the fuck is going on? There has to be some major shit going down that they need to pull us back. On top of that, no one is talking, nothing, not a fucking peep as to what the fuck is going on.”

“I hear ya man, the way this feels, I almost don’t know if there will be an earth to get back to.” “What are you talking about? You think the resistance hit us at home?” “No, no, with the firepower we have out there nothing could get in.” “Then what, aliens?”

“Ha, more likely the return of the son of God. You know there ain’t shit out here. I’m talking some homegrown drama. Before we left I was hearing something about the machines making a connection with nature.” “What, something new in their weird zen Buddhism fuckn philosophy?” “Naw, something about the cells they have been programmed to talk to are talking back.” “Hu?”

“That was the thing... the machines didn’t tell us. Apparently, we just found out about it because of some technical malfunction thing. Damn things wa-” “What’s with the banter, less talk, and more work, let’s get this thing on auto so I can get my beauty rest” “Aye-aye captain!”

“Hey, the perks just made it worth my while, meaning I don’t have to pay back the ton of money I owe for school, and that's Captain dick head, Sir.” “Well, those perks include any idea as to why we are all going back?” “Alas, that is above my pay grade. Check em n' freeze em, that’s all I was told. Gotta admit this thing has me shaken up though... Wow, what have you been doing man, whoever did this stitching was a god damn mad scientist.

“It got rough and we had to improvise sometimes, but don’t change the subject, really, nothing? and what’s got you worried?” “Just something this hush means crowd control, obviously if we knew what was going on some people will have a problem with it.” “What are you talking about, we are marines, we’ve been designed to be thrown into the shit, no questions asked, and with smiles on our faces.” “Exactly, whatever is going on must be bad enough to make a Marine shit his pants.”