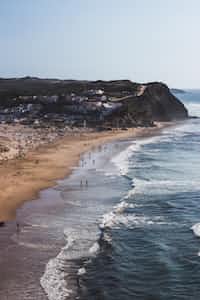 aakashtiwari A Storyteller
Autoplay OFF   •   a month ago
Transcript Use Images
One day a giant man was found sleeping on the shore of this small port which became the headline of every news feed.

But who was this mysterious man? Is he too belong to a world like ours!
fiction short storyshortstorymysteryfantasy

It was night when I finally reached the harbour, half expecting it to be dark and deserted but amazed to see it still so alive and full of people even at this time of hour.

It was like I was walking into a carnival.

All around me, if I glance, I could see people of all ages,

From the energetic youngsters, pacing around this beach while flashing their smartphones in a hope to capture every essence of this, like fireflies buzzing around a garden,

To the people at the pinnacle of their life, who have travelled miles just to be here, with a hope to witness something which they might never get a chance to witness again,

To the kids, running around aimlessly, unaware of what was happening all around them, busy in the league of their own.

I have to admit that I was amazed to see all these festivities all around me. One month ago, when I first heard of this news, my own curiosity took the better of me.

I desperately tried to understand the how and why of this. I spent days and nights researching, trying to come up with a logical explanation behind this. But, now when I was walking on the shore among all these people, I no longer felt the need to find any answers.

I only felt what they might be also feeling in this moment, It was a feeling which you get when you know you are about to witness something so extraordinary that you may forget everything else and just feel glad to be alive, living this memory.

So, standing on the beach, staring at the eye of this sleeping giant, I was left thinking about only one thing,

I was now on the deck of the ship, watching the endless sea in front of me, but my mind was still occupied with the thoughts of last night.

I couldn't help but think of the possibility of a day when the giant man rises from his long dream and find himself in this strange land surrounded by these strange people.

Will he think of us as a friend or as a foe? Will he still long for his home even after all this while?

It was in this conundrum that I didn't realise that it turned dark and the ship crew were directing us to go inside as the tides started to hit the ship at full force now.

I immediately ran inside, hoping and praying for the sea to calm herself. But, from the small window in my cabin, I could see the waves getting bigger and bigger with each turn of the tide.

For a while, everything went silent as if the sea herself was trying to catch her breath but then the ship cried a loud shriek and the whole ship shook at once.

When somehow I managed to escape out of my cabin amongst all the chaos, I saw people all around me, jumping blindly into the cold sea, with panic stricken eyes.

The front part of the ship where the captain once resided was now missing and the back portion of the ship, along with me was slowly sinking into the sea.

And before I could even gather my thoughts, I was fully immersed into the sea along with the rest of the ship.

Out of desperation, I panicked and tried to grasp for something in water but it was all hopeless. I was descending deeper and deeper into the sea and no matter how much I tried, like everything else around me, I was too becoming part of the sea.

And soon, the panic in my heart receded and nothing but peace filled my heart.

I thought this was the end of my story.

But as I slowly reached the bottom of the sea, something changed around me.

Suddenly light filled my eyes and It felt as if the water started rising around me.

It was as if the world was going upside down.

When I next opened my eyes, I was near the shore of the sea, drenched completely in sea water. I somehow managed to crawl out of the sea, and surrendered myself onto the ground.

I then heard a faint murmur around me which started to grow louder and louder as if something was slowly approaching towards me.

Only briefly did I glance towards that direction before sleep finally took possession over me.

They look so much alike us!

Its just that they were ever so small!