Commaful
The man with the Ice-cream cart 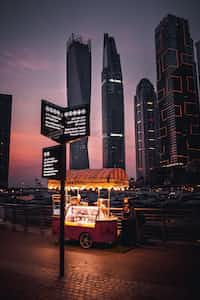 aakashtiwari A Storyteller
Autoplay OFF   •   2 months ago
Transcript Use Images
An Ode to the season of Colour, of warmth and of Ice-Cream.
fiction ice-creamicecreammemoriessummer

The man with the Ice-cream cart

As the sun was setting down, an old man was walking up the slope while pushing a cart.

He walked slowly as the cart was heavy. But he was used to this. He was doing this since he was young.

So, even though it was the peak of summers and the sweat kept dropping down from his forehead, he kept pushing the cart up the slope.

He still remember the day when he and his wife bought this ice-cream cart together.

His wife was so happy that day. They together pulled this cart up the slope while singing their favourite song.

He didn't felt any weight in the cart that day.

Once they reached the top, they waited.

The school bell rang, and then it was just an explosion of children popping out of the school like popcorn from machine

and once they saw the Ice-cream cart outside, there was no stopping them.

Some shouted mango, while some raised there hand for orange, while few just stood there,

pondering which one to choose like this was the biggest decision of their life.

But these two, they were just happy to be there.

To see the faces of these children sparkle with joy when they receive their favourite ice-cream, or when they enjoy the first bite, or when they discuss

among their friends why theirs is the best in the world, was the sight they waited for throughout the day.

He could see the school building now, Almost there, he thought to himself.

He reached the school in time. The school bell hadn't gone yet. He sighed in relief.

He pushed the cart under the shade of a tree and waited.

The bell rang and like every-time, there was a frenzy.

But instead of going towards the Ice-cream cart, the kids started walking towards the newly opened ice-cream parlour which was the new talk of the town.

It had everything. Arcade machines, Comics, and all kind of tasty food.

But the special attraction was the unique flavours of ice-cream. You can just choose whichever flavours you want and then they mix all of them together and so you get to taste all your favourites at once.

There was simply no competition between this and a simple ice-cream cart at the side of the road.

The old man waited for a long time but none of the kids came towards his cart. It's time to go now, He thought to himself.

He closed the lid, removed the stopper and was ready to push the cart again.

But then he saw a little girl standing there with her mother.

"Mom is this the one?" The little girl asked her mother while pointing at the cart.

"Yes. This is where your father and I used to eat everyday when we were your age. This is the best ice-cream I ever had." The mother spoke and smiled at the old man.