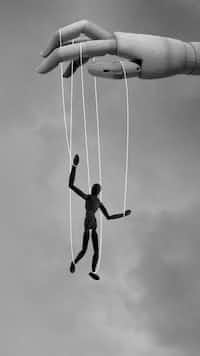 aakashtiwari A Storyteller
Autoplay OFF   •   2 months ago
Transcript Use Images
Story of the puppets as they travel from village to village for the puppet show but little did they know that the next show could soon be their last show ever.
fiction short storyshortstoryfantasypuppets

A wagon was moving slowly in the middle of the night.

The puppeteer was snoring without a care in the world and the horses were left on their own to stroll leisurely in this otherwise quiet night where only their footsteps often breaks the silence in a very rhythmic way.

But apart from the footsteps of these horses, if you follow the wagon closely, you could also hear faint whispers coming from the back of the wagon which was otherwise hidden from plain sight.

Towards the back of this wagon were these lifelike puppets who had recently performed in a puppet show in the village which they had just passed.

"Did you see how I swayed my sword today?"

But while these three puppets were enjoying the success of their show, the old wizard puppet was standing quietly at a corner, lost deep in thoughts.

The princess went upto him and asked with concern, "What is the matter? Anything wrong with the show today?".

The old wizard glanced at her as the other puppets also joined them at the corner of the mini stage.

"This thing has been bothering me for a while now. Did you see the number of people who gathered at the show today in that village?" He asked.

The princess pondered over this for a long time while the prince and his horse just stared at each other with perplexed look on their faces.

The old wizard didn't wait for an answer, he continued, "There were only a handful of people left by the end of the show today".

When nobody spoke for a long time, the prince finally blurted out, "So, there were only few people who watched the show today. Why this bothers us? we will perform better in the next show in another village and I am sure we will get a much better audience there."

He then raised his sword to show his optimism and with that he and his horse went back to the stage to continue with their celebrations.

But the princess stayed there with the old wizard. She patted his shoulder and whispered, "Maybe the prince is right, maybe there is nothing to worry about".

She smiled at him and then walked towards the stage to join the prince and his horse as they started singing their favourite song.

But the old wizard remained standing there at the corner, watching the hills and the farms as they pass by him and hoping for once, his instincts were wrong.

When the puppets woke up again, it was morning and the sunshine filled the back of the wagon. The wagon had stopped moving now.

The puppets went to a corner of the wagon and glanced outside and saw that they had stopped outside a big shop in the outskirts of a village.

They saw the door flung open and a bearded man stepped outside the shop and greeted the puppeteer and then together they both went inside the shop discussing about something.

The shop was a handicraft shop and was decorated with all types of handmade stuffs like lanterns and pots and mats and...

There was a sudden cry as all the puppets held their breath.

Because hanging by the threads, just outside the shop, were dozens of lifelike puppets.

The wagon started moving again but this time there was no whispering among the puppets.

"What we are going to do?" the prince finally asked while pacing around haphazardly. The princess looked at him with tears in her eyes and said, "There isn't anything we can do now. We are going to end up like them!".

They felt lost and hopeless but then all of a sudden they heard a faint sound coming from the trunk underneath the stage. They opened the trunk and found an old sock staring at them.

They helped him climb up on the stage. The old sock looked at them and gingerly spoke, "I know what you can do!"

And so next day, as the puppeteer started narrating the tale of the prince who rode to the castle on his horse and rescued the princess after fighting the evil wizard,

suddenly in the middle of the act, the puppets stopped obeying his command. He flicked his wrists, jerked his hands but the puppets didn't move. They were still as statues. He nervously glanced at the audience but saw only anger in their eyes.

He didn't understand what was happening to him because his puppets had never disobeyed him before. But then he remembered something that his father taught him once before.

"Son, always remember that the bond between us and the puppets is build on trust and if it ever breaks then nothing will be same again!"

The puppeteer looked at the puppets with guilt in his eyes. He has now realised that in his quest for getting rich sooner, he has forgotten about them. He thought of ending the show but then all of a sudden, he felt movement in his hands and saw the puppets moving again.