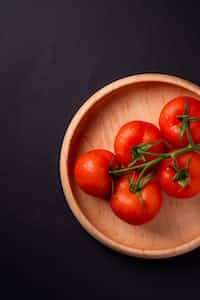 aakashtiwari A Storyteller
Autoplay OFF   •   a month ago
Transcript Use Images
As the world fights over whether the Tomato is a fruit or a vegetable, there is only one thing which can save us all!
fiction sattireweirdfunny

A highly decorated man walked into a restaurant.

Ignoring the astound look at the faces of the people sitting at their tables as he walk, he sat on the table reserved for him.

The waiter nervously approached him with a menu but he ignored it.

He knew what he liked to have today.

Without looking at the waiter, he asked for a fruit bowl.

Within a minute, the waiter arrived again with a bowl in his hand.

He placed the bowl in front of this man.

The man looked first at what was inside the bowl and then at the waiter. The bowl had a perfect looking tomato sitting right in the middle.

The man shouted, the waiter shrieked, the chef arrived.

Suddenly there was throwing of culinary between the two and the people at the restaurant also joined in.

"We are live from the place where both set of protestors have gathered to protest. The police is trying their best to contain these angry protestors." A TV reporter was at duty on the street with a cameraman alongside her,

while at both sides there were protestors with banners.

She first made her way to one side and approached one of the protestors, a young man who was an activist in this subject.

"I have been fighting for this my whole life. It's time the government takes some action. We want Tomato to be considered as a fruit. It has all the properties which any other fruit has. We want justice for Tomato!" The young man waved his banner at the reporter.

She then went to the opposite side and approached an older woman among the protestors,

"I don't understand what these schmucks are protesting about. I am 80 years old now and my whole life I have known Tomato as a vegetable. Nobody gonna change my belief now!" The old woman grunted.

As we know, It just takes a spark to cause a wildfire.

A word was said, a reply given and then someone threw a tomato right at the face of one of the protestors and then suddenly there was chaos.

Within no time the streets ran red.

Red with all the tomato juice which flowed in this massacre.

The supreme court was in session.

The honourable judge residing on his chair.

As the prosecutors, the defendants and the rest of the people waited, the accused was brought inside the court on a plate by a police officer and placed next to the defendant party.

And so the trial began.

One by one the witnesses were called. Some were scientists while some academician in this field.

The debate went on and on and the judge lost all track of it. He was looking straight at the single tomato resting on the plate in front of him.

He called for a recess and ordered a bowl of tomato soup for lunch.

After debating for an appropriate amount of time, the debate finally ended and then it was time for the verdict.

"After going over all the points which have been discussed in this court, the court has finally arrived on a verdict. From now on, Tomato will be considered both as a fruit and as a vegetable." The Judge announced his verdict.

And so, next day when a gentleman walked into the same restaurant and ordered the same fruit bowl and saw it has a tomato sitting in the middle, he didn't flinch a muscle. He simply took the tomato out of the bowl and ate the rest of it.