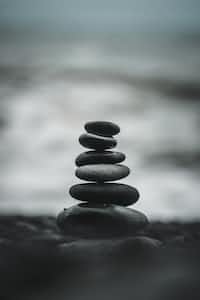 aakashtiwari A Storyteller
Autoplay OFF   •   a month ago
Transcript Use Images
Sometimes in moment of desperation all we need to do is to look around to find the answers.
fiction lifethoughts

A man was standing at the edge of a cliff at the top of a mountain.

His feet trembling with fear.

It was as if his mind was forcing him to be here but the rest of his body doesn't belong here.

It was in this trance state that he didn't notice that he was not alone here anymore.

There was someone else also standing behind him.

Watching him with a kindness in his eyes and a smile on his face while wearing an orange robe and carrying a small bowl by his side, a monk was also standing there.

"I don't think you are enjoying the view from here!" The monk finally spoke after observing the man for a long time.

The man startled to hear a voice behind him.

He turned around and found himself looking at a monk standing there in front of him.

"I just want to be alone" The man answered while looking down at his feet.

The monk acknowledged the answer with a nod and started walking towards the other side of the peak.

Out of curiosity, the man also started following him.

The monk stood near a barren tree and whistled.

Out of nowhere, one by one the squirrels which were living on this tree, started coming out from their nests.

and the hungry squirrels started eating the nuts as soon as it landed.

The man was watching all this from a distance. He felt a sense of both happiness and sadness in what he was seeing.

"You see this tree. It provides food and shelter to these squirrels through many seasons."

"But when autumn arrives and this tree loses all it's fruits and leaves, these squirrels were left with nothing to eat. Some of them couldn't survive the season because of this."

"So, when autumn arrives, I come here each day and feed these squirrels instead." The monk explained.

"This is nature's way of telling us that we need to look after each other, that we are not meant to be alone. Don't you think?" The monk was now looking at the man.

The man had no answer.

But the man stood there exactly like he was standing a while ago, still lost in his thoughts.

Although, now he know how to find what he was missing in his life all this while,

now he know how to find tranquility.