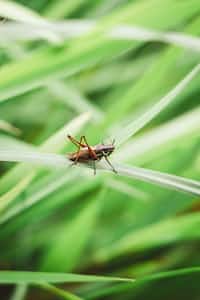 _merkion_ Community member
Autoplay OFF   •   15 days ago
Transcript Use Images
A ploink and then a crash. A grasshopper kicks up sand when it lands in the midst of an already agitated crowd of ants. There had been a Find washed in by the rain nearby. The first of the ants approaches in that characteristic systematic wander from in front of the grasshopper. The grasshopper jumps.
fiction spiritual

A ploink and then a crash. A grasshopper kicks up sand when it lands in the midst of an already agitated crowd of ants. There had been a Find washed in by the rain nearby.

The first of the ants approaches in that characteristic systematic wander from in front of the grasshopper. The grasshopper jumps.

It hits the underside of the bush that had been giving its pleasant shade. Another ant approaches in that wander that they have from the side. It senses the interesting object.

It further investigates with its antennae. The grasshopper jumps. No dice. It it hit the stiff grass lining the wash. It jumps again. Back into the frying pan.

Another ant senses the grasshopper. It approaches from behind. The ant confirms. Enemy identified: Harvest the Find. Jaws find their way to the closest part of the Find.

Jaws clamp into the Find and down onto wings and wing shield. The quarry will not make it far. It's all but over now. Legs start sliding back reaching and digging for anything to hold on to.

The grasshopper can still walk basically unhindered. The ant is held mostly off the ground. The ant's legs find only green abdoment. The grasshopper jumps. The wings only open on one side.

Another set of jaws clamp down.

While the jaws hold on, so tightly that they look selfish in their determination, like they're trying to be a hero, a dozen quick legs dig at the ground back in the direction of the colony.

A third set of the jaws clamp and cut into green chitin. You must right yourself. Your crash had disoriented you, you landed upside down. Your left hind legs grasp out and back.

Your front legs reach forth and turn yourself upward. Ant after ant rush forth from every direction at once. You're sinking in them.

You struggle and pull yourself one step forward, away, as if you could even hope to make it now. Crushing, cutting, tearing you apart, more and more jaws clamp into you.

Your next step will be your last. They're all over you. Your back legs straighten, you fall forward. They now can reach your head.

Front legs dig uselessly under you before they too are fully restrained.

And shortly even that will fade. You dwell on the ultimate Consequence as it is unendingly happening, your new condition.

You die a million times a second, in a nauseating, lonely shame and dread. The remnents of Great Experience left in you slowly give way to a low hum.

Then the soft jazz fades in, and the bubbling of the fountain in the lobby of the doctors office you went to as a kid. You can feel somewhere around you.

Maybe it looks like that lobby, maybe it doesnt, maybe it's what courtrooms looked like on TV.

the Acheron through their sponsor with 4 low monthly payments instead of all at once or maybe you just mediated really hard in life, the point is now you can pretty much chillax.

There's signs for everything everywhere so you should be good but ask Atlas before you venture out of your branch of the yggdrasil, 'cause he knows all the roads.

You've only got the card for the Asphodel floor though. At least there's flowers everywhere, however it is a little unnerving that they're all grey. Zues has to like you to get into Elysium.

Maybe you'll get to check out tartarus next time.

Maybe you'll get to pass by Italian politicians from the renaissance on your way to the center of it or maybe you'll live a virtuous life and get to be a cow,

chewing your cud blissfully unaware of what awaits you at the end of your first and last train ride, your McFate.

While I'm here though, I may as well check out the Gladiator Guild; I always wanted to get into combat sports.