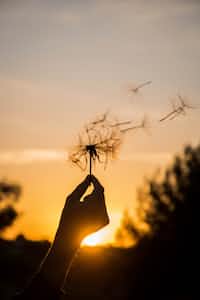 _cheshir3 As lost as Alice, as mad as the Hatter
Autoplay OFF   •   a month ago
Transcript Use Images
A simple short story based on the song 'Tightrope' from the movie 'The Greatest Showman'. Warning: sadness ahead.
Hope you enjoy!
romance shortstoriesshort storiestightropefeelingsromancesad romancesadromancesongssongficsong fic most romantic feelings stories

A modest country house stood alone on top of a hill. A woman threw open a large window on the second floor and stepped out onto the balcony, leaning against the parapet and watching the sunset.

She had beautiful red hair, long and wavy, that surrounded a still youthful face, dotted with freckles, and blue eyes as deep as the sea. Her ankle-length nightgown swayed lightly in the breeze. Around her neck she wore a silver chain with a small glass bottle hanging from it.

As the sun disappeared behind the mountains on the horizon, she went back into her room, leaving the window open. She took a music box from a drawer next to the bed, opened it, and charget it for quite some time. As soon as she let it go, piano music softly started to fill the room.

When she was back on the terrace she took the little bottle she wore around her neck, shook it slightly and poured the white sand that came out of it into one hand, then blew it away. Finally, in a soft voice she began to sing, building the melody on the music from the music box.

The sand lit up as soon as her voice reached it, quickly descending to the ground in a luminous spiral, then making up the figure of a young girl walking in the meadow below. She wandered aimlessly, until next to her another swirl of bright sand created the figure of a young boy with a pair of large wings folded on his back.

"Some people won't sail the sea 'cause they're safer on land To follow what's written But I'd follow you to the great unknown, Off to a world we call our own."

As the boy slowly approached, she turned and greeted him with a short bow, which the boy returned. He held out his hand and she took it shyly. Shyness that seemed to vanish as soon as he drew her to him to kiss her. They parted after a moment, and hand in hand they moved away, only to turn back into sand and create another scene under the watchful eyes of the woman, who raised her voice ever so slightly.

The dust swirled in mid-air and went back to form the two figures: the boy's arms were now wrapped tightly around the girl's waist, while his wings were outstretched, catching the wind and keeping them suspended in the air. After a moment of hesitation, the girl relaxed and released her grip on his hands, aligning her arms with his wings.

"Never sure, never know how far we could fall. But it's all an adventure that comes with a breathtaking view,"

The boy turned the girl in his arms with a quick movement, and without taking his eyes off hers, he slowly stopped in mid-air and began to gently descend, turning on himself, until they both reached the ground.

The woman on the balcony lowered her voice slightly, and as the melody progressed, the girl made of dust broke away from the boy and began to twirl, dancing to the rhythm of the music. When the voice rose again, the boy also joined the girl, accompanying her in her dance.

With graceful moves, the pair made their way under the balcony, where the figures disintegrated again into two trails of glowing sand to form a new scene.

"Mountains and valleys, and all that will come in between, Desert and ocean, You pulled me in and together we're lost in a dream"

From the left side, the woman watched as the two figures walked hand in hand. The girl looked around with eyes full of wonder, occasionally clinging to his arm, or pointing to something in the distance. Until suddenly they stopped. Now they were standing side by side, no longer holding hands.

A third figure emerged in front of them and the girl approached it, cautiously. But the figure seemed to shout at the girl and chased her away with angry gestures as she retreated with the look of a beaten puppy. With a final sudden movement, the figure turned sharply and disappeared.

The girl brought her hands to her face and ran toward the boy, who welcomed her into his arms, comforting her. Here the figures dissolved again, and when the voice hesitated to arrive the sand remained pirouetting in mid-air, as if waiting for the melody. The woman then resumed singing, louder than ever.

The sand rushed to the ground with a whirling motion, and the two figures appeared once again, brighter than before. They chased each other happily across the lawn, and the girl, euphoric, began to dance again.

The woman's voice stopped abruptly, and the figure beneath her leapt in a magnificent pirouette, but when the boy stretched out his arms to catch her his figure dissolved. The girl fell, rolling on the ground, and after a moment she slowly sit up. Reality hit her at full force, and left her alone, on her knees, in the middle of the lawn.

The music of the music box had stopped, and the sand that had previously formed the figure of the young girl very slowly returned to the woman on the terrace. Despite the lack of music, she continued her singing. Now her voice was very low, but at the same time very sweet.

The voice began to rise again, and the sand swirled in front of the woman, increasing its speed and matching the intensity of the voice.

When the melody reached the highest note, the sand made up the figure of the boy, wings neatly spread on his back. He extended an arm toward the woman, as if he wanted to reach her. The woman also stretched out her hand in response. But when their fingers touched, the figure dissolved, leaving the woman with her arm outstretched towards nothing and a tear slowly rolling down her cheek.

The last notes shakely left her lips. "With you, ooh-ooh-ooh-ooh. With you."

The sand had now completely lost its glow, and floated inertly in front of the woman. Slowly, she lowered her arm. After a moment, she took the glass bottle and opened it again, letting the sand flow inside.

When even the last grain was inside, she closed the small container and watched the sand as it swirled and slowly took one last shape: now, trapped in between those glass walls, layed the seed of a dandelion. She let the pendant fall back on her chest, then, casting one last glance at the dark sky, she finally retired to her room, closing the window.

She layed down and between the covers clutched the bottle to herself. She couldn't have noticed the winged figure that was sitting on the roof of the house, listening to her voice with closed eyes and a broken heart.