Commaful
14 Inspirational Entrepreneurs U25 of 2015 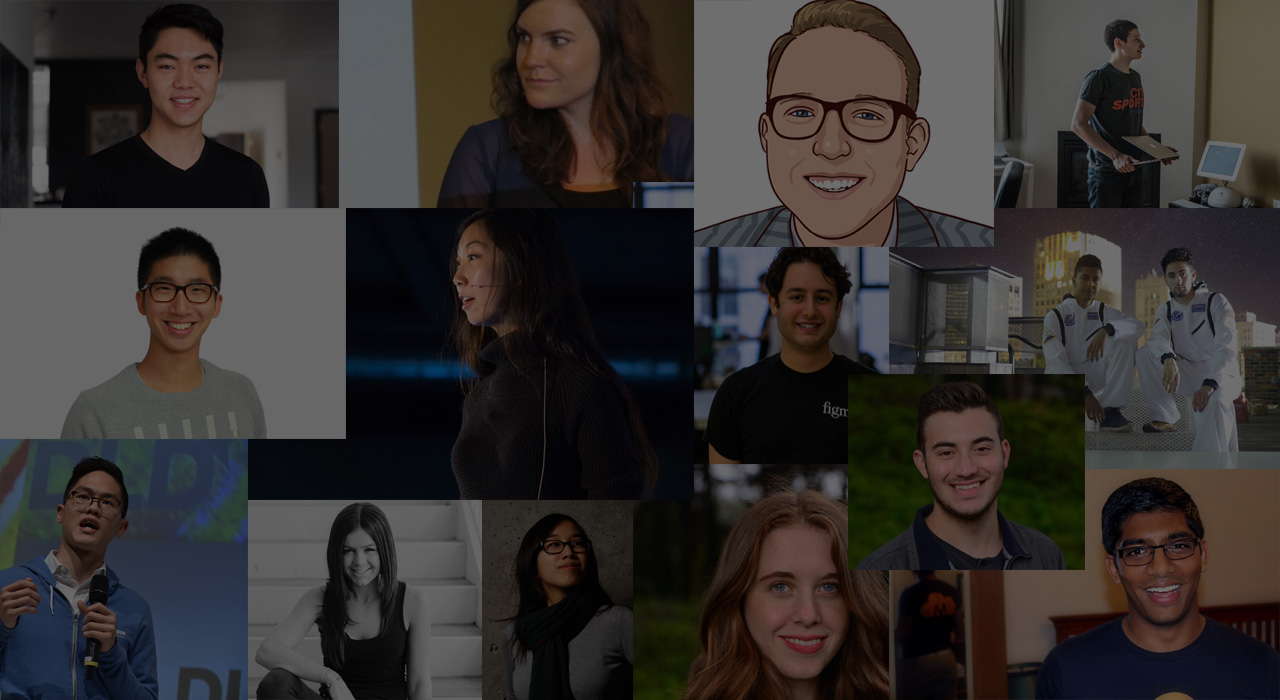 2015 Best of 2015
Autoplay OFF   •   6 years ago
Transcript Use Images
Thank you to the Thiel Fellowship http://thielfellowship.or... for helping with this list!

Jeremy Cai: "I'm a pretty dumb guy with a voice that - for whatever reason - people happen to find smart."

Prahasith Veluvolu: "You're going to get a million reasons for why your idea isn't going to work. Don't listen to that bullshit, what matters is if you think you can. Stop ideating, start executing and kill it :)"

William Zhou: "Go travel. It'll shape your world view and give you perspectives. Learning different cultures will teach you what makes us human. It will help you focus on what really matters in life, be it work or personal."

Michael Lisovestky: "Experiential learning is exponential. Start doing ASAP, because the more that you experience early, the faster you'll grow as an individual."

Stacey Ferreira: "People always ask me how to balance work and life as an entrepreneur. The answer is to only take a leap into entrepreneurship with a project that is worth unbalancing your life for."

Brian Wong: "You can take some of what is perceived to be your biggest weaknesses and pull a jedi-mind trick and turn them into your biggest strengths."

Caroline Beckman: “One with experience is never at the expense of one with an opinion.”

Hunter Rosenblume: "The best decision I ever made as an entrepreneur was to drown out the noise and find focus."

Ocean Pleasant: "I believe the most effective way to mobilize millennials for social change is to catalyze personal connection around the issues that get us fired up: human rights, animal welfare, the environment. We're seeing a demand for systemic change and transparency, an urgency for justice for all people and the planet. This drives me every single day; the possibility that I can play a role in mobilizing my generation and impacting positive change in the world. With the Real mobile platform, our mission is simple: help young people meet new friends and make an impact."

Xavier Di Petta: "It has been my observation that most people get ahead during the time that others waste” - Henry Ford

Watch out for these young entrepreneurs!

I co-founded and lead product at OnboardIQ. We are reinventing the way a large workforce is built from the ground up. Before this, I worked at Shyp, a shipping service built per modern standards.

aka The Independent Variable. I like coffee, making things, helping people and coffee. Also lowkey co-founder of Mimir (YC S15) and Purdue dropout.

Co-founder & CEO of HomeSwipe. Graduate of Draper University. Graduate of NYU Stern. Web hosting company at 14, living the dream since.

Cathy is co-founder and CEO of Ranomics, a biotech startup improving the accuracy of genetic testing by evaluating the effects of all hereditary gene mutations before they are seen in patients.

Developer, co-founder of DeskConnect and WorkFlow. WorkFlow, a simple automation tool for the iPhone, was selected for an Apple Design Award in 2015.

Co-Founder of Forrge. Co-Author of 2 Billion Under 20: How Millennials Are Breaking Down Age Barriers & Changing the World. Previously Co-Founder of MySocialCloud (acquired in 2013).

Brian started Kiip at 19 yrs old to reward mobile users for their achievements inside apps & games. During his time off he travels the world, obsesses over new tech, & feeds his passion for games

Dylan is the CEO and co­founder of Figma, which he started with the support of the Thiel Fellowship in 2012. Prior to Figma, Dylan interned at Flipboard, LinkedIn, Indinero and O’Reilly Media.

Eden Full Goh is an engineer. She is the inventor of the SunSaluter, a low-cost mechanism that optimizes solar panels while providing clean water for off-grid communities in sixteen countries.

Ocean, 18, is an entrepreneur & musician. She's served on the founding team of 4 national best-selling magazines, including 1 she founded, REAL; a publication for socially conscious millennials.

Born and raised in Australia, I moved to California after raising venture-capital funding for a media startup. Passionate about the future of media, I focus on growth, branding, and content.