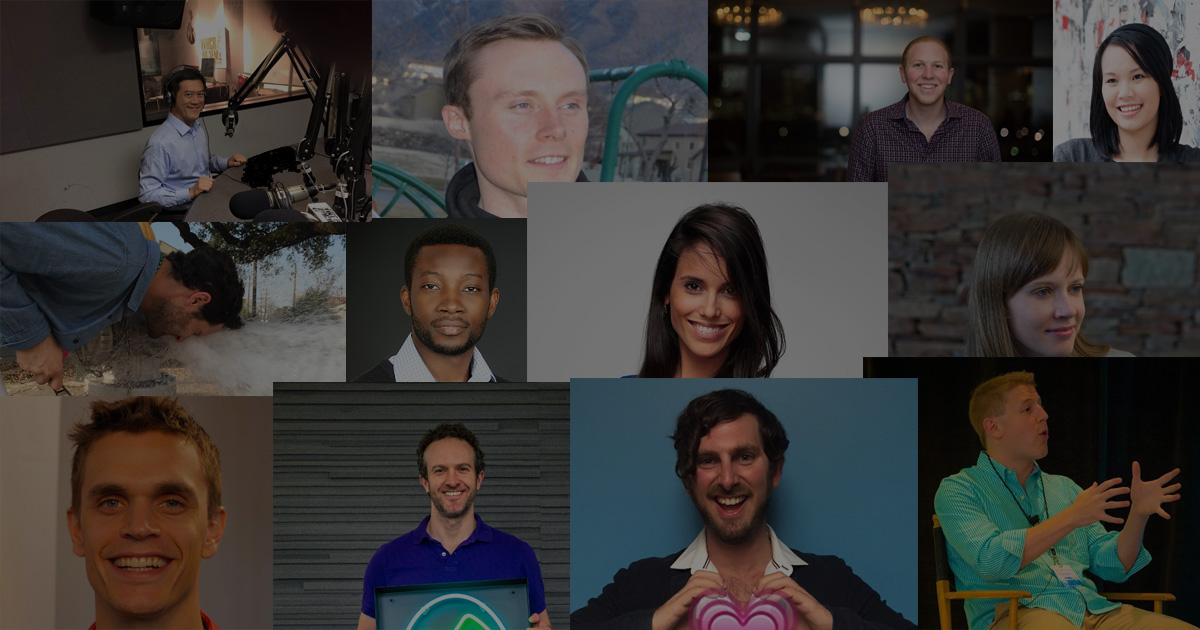 2015 Best of 2015
Autoplay OFF   •   6 years ago
Transcript Use Images
Josh Constine: "I don't consider myself a writer, because today, writers must be visual artists too. GIFs, videos, and photos aren't just supplements to paragraphs any more. Because of how blogs and social media work, imagery is how audiences first form an impression and decide whether to read something. If writers sacrifice control to some other visual editor, they not only lose the chance to tell a richer story. They’re also permitting someone else to fundamentally change how it will be perceived and how many will read it. Writers, step up! Learn to make GIFs, photoshop images, and speak on camera. If a picture’s worth a thousand words, you should still be the author."

CamMi Pham: "I believe more people need to start to learn, unlearn & relearn. Learning can be very dangerous if you don't know when to unlearn. I hope my work will make people think and start asking questions."

Elizabeth Plank: "There's a saying that goes "dreams don't work unless you do" and it's the one I live by!"

Claire Diaz-Ortiz: From Mary Oliver:
Tell me, what is it you plan to do with your one wild and precious life?
When it's over, I want to say: all my life I was a bride married to amazement. I was the bridegroom, taking the world into my arms.
To pay attention, this is our endless and proper work.

Thomas Oppong: "You’ll suck at most things in the beginning. It takes time, persistence, and patience to create your most amazing work. Don't stop because you failed. Keep doing what you love, even if no one buys it, sponsors it or shares it. It matters that you show up. The magic will eventually happen!"

Isaac Morehouse: "Don't put pressure on yourself to find your one true calling. It's easier than that. Just stop doing stuff you hate. Everything else is fair game."

Jon Tanners: "I'm just a wayfaring stranger trying to tell stories and make cool shit before my time runs out—that or eat as much chicken shawarma while listening to Future as possible."

Justin Lafazan: "Someone once said "The best things in life make you sweaty." I really liked that quote, 1 because I'm always working hard, but 2 because I'm currently really hot."

Jared Kleinert: "One of my favorite quotes is from Steve Prefontaine, which is, "To give anything less than your best is to sacrifice the gift." Equally inspirational is R. Kelly's Space Jam track I Believe I Can Fly."

Jason Ma: "In life, school, or work, you must resourcefully act with purpose, curiosity, and wisdom toward positive outcomes, if not a vision. Hone your practical EQ.”

12 Business & Entertainment Writers to Watch in 2016

I am an ecommerce + digital marketing strategist by day, and blogger by night and an unlearner 24/7.

Senior Editor at Mic, a leading news and media company for young people, and the host of Flip The Script, an award-winning Mic weekly video series that confronts social issues.

Jason co-founded Basecamp back in 1999. He also co-authored REWORK, the New York Times bestselling book on running a "right-sized" business.

I was an early employee at Twitter, Inc. and was named one of the 100 Most Creative People in Business by Fast Company. I'm an author (Twitter for Good), speaker, and globetrotter.

Benjamin Hardy is the foster parent of 3 epic kids. He is pursuing his PhD in Organizational Psychology. His work has been featured at TIME, Huffington Post, Business Insider, New York Observer,

Thomas Oppong is a Blogger, Entrepreneur and an Author. He is the founder at All Top Startups. Curator at Postanly. And Contributor at Entrepreneur Magazine.

Isaac Morehouse is the founder & CEO of Praxis. He's an entrepreneur, author, and podcaster dedicated to the relentless pursuit of freedom.

Jon Tanners is a writer, manager, & part-time mad man, attempting to make sense of the universe in Los Angeles. He graduated from Columbia University and writes for Pigeons and Planes and Complex

Featured in Forbes, USA Today, The Huffington Post, Inc. Magazine and more, Justin Lafazan is an acclaimed entrepreneur, speaker, author and consultant...all at the age of 19.

Jared is the co-author of the recently released book 2 Billion Under 20, which was a #1 release in Business Leadership and IBM's Social Business Book of the Month in August, 2015.

America’s chief mentor for millennials & teenagers, Forbes contributor, member of the B20 (for the G20), international speaker, and the author of Young Leaders 3.0