Commaful
The Angel Sees Back 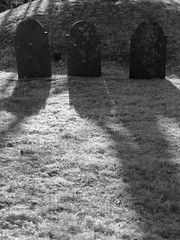 The Angel Sees Back

She never missed a day.

All through the year, through the weather - the mild drought they had that year, the Spring storms, the days nobody would ever want to spend at a cemetery, she was there.

She came most often in the morning, probably on her way to work, but it was in the late afternoon when he realised he was in love with her.

She arrived nervously that day,

holding a bunch of bright red flowers in one hand and a can of soda in the other,

but she smiled as soon as she rounded the bend in the path from which she could first see the grave she always visited, and though he knew she couldn't see him, he couldn't help but smile back.

The grave she visited did not belong to him.

It was actually two plots from his own grave, far away enough that he couldn't see the writing on the stone that would have told him whose grave it was,

but close enough that she passed by him every day, and that he could see her as she stood in front of it. She always stood, never anything else,

just stood and looked at the engraved words with a weary sort of sadness, staying there sometimes for a few minutes, sometimes just more than thirty seconds.

Then she would leave, and go past his grave again

and he would watch her leave, until the curls of her hair disappeared around the bend in the path.

It was a pleasant ritual of theirs,

and even though he knew she didn't know she wasn't alone, he couldn't help but feel that he was an integral part of the event,

and that the visit to the grave two plots away from his would have been impossible without his watching over it.

The actual moment of his realising that he was in love came and went in a flash so fast he barely realised that it had happened;

one moment she was simply walking along the path with her crimson flowers, and then before the next moment could even start, he realised how beautiful she was,

- so much more beautiful than the flowers -

and how the flowers were as red as blood and it might be her blood one day;

and she would never know that he had been watching and she would go on and die without ever knowing that he...

They were ugly thoughts, terrible thoughts, and he knew then that he could not continue.

He had to speak to her.

After all, he had decided that he was in love, and he wasn't about to forget it.

She came closer to his grave, and he smelt the flowers, and he smelt her, and he fell even more in love, and so he held onto one of the red petals, and ripped it off its stalk.

She felt the tug.

She turned, and looked for him - but looked right through him, for she could not see him.

But then she saw the flower petal, which he was holding behind his back

- a silly thing, really, given she couldn't see him -

and she could see that it was floating quite still in the air, and she saw that something about the petal was not right.

He could see that she saw, and so he lifted the petal, and her eyes followed it as it ascended, and she reached out to grasp it.

She reached out, and without thinking

he grabbed her by her bare wrist.

Her voice was honey and silk, and in fear, he let go of her.

That was the last that he saw of her: her disappearing form, running from the grave,

and he noticed then that she had dropped her soda, and that red bubbles were pouring out onto the gravel.