Commaful
Matters of the Hearts 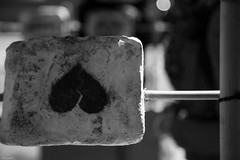 Matters of the Hearts

The Queen of Hearts, She made some tarts, All on a Summer’s day. The Knave of hearts, He stole those tarts, And took them right away.

The Queen was angered by this jest, And so did call, at her behest, All the members of the court, And gave to them a wicked thought: “He who slays the knave for me Shall ever in my favour be

So said the Queen, And thus began The execution of her vengeful plan. From all the Hearts, she called a band To search the thief through all the land.

First came Two, A pitiful and weakling thing. He was not strong, Nor great and fast, But she knew no man to him outlast In adoration of his King.

“Fair Queen,” cried Two, “Fear not, for I the thief shall find! I’ll creep right up, And as he sleeps, I’ll kill him from behind.” This said, he left.

Next came Three, A young and pretty wench. She had not the strength of many men, But this the Queen did know: Three did yet have far more strength Than Three had yet let show.

“Fair Queen,” cried Three, “Leave this quest but to me! I’ll find the thief, And when I do, His soul shall I set free.” This said, she left.

Then came Four, Pale and grim as death, His mouth set in a solid frown And ice forming on his breath This was he – if any – for the task For she knew his gravity to be more than a mere mask

“This knave shall know no rest; Never shall the grey day come I do not seek him on my quest. And when I find him, pale and dim, Have no fear I’ll be the first to rip him limb from limb.”

Then came Five, An axe already at her back. She had the skill to fight a war; Only patience did she lack. She bowed down low before the Queen, Then stood again, and spoke:

“Worry not, for there shall never come a day I leave the Knave alive. If to fight he wills, then a fight I shall give him, Whatever way he ends his days, he shan’t find the path to heaven.”

Then came Six, Trying hard to hide his fear. He was a learned man, and wise, Yet timid as a deer. He shook a little as he spoke, His voice a-shaking in the ear.

“For his crimes shall this Knave pay. And though I care not for violent means, I shall search with all my art, And when I find him, mark my words, I shall stab him in the heart.”

Then came Seven, Her lips caked red with blood.

Her teeth were thin, and sharp as knives, Her face cowled beneath a sodden hood, And in her rolling, glazed eyes, there seemed more beast than man, Yet even she told of her plan:

“I’ll search for this man with my every hour, And when I find the knavish brute Right between his eyes I’ll shoot, And then his corpse devour.”

Then came Eight, A bubbling and pleasant lad.

He knew yet little of such matters, But for practice was he glad. At his waist hung there a single sharpened knife, With which he hoped – all things to plan – to end the tart-thief’s life.

“Let me but find the fiend. On that day, I swear, From here to there, All the world shall hear him scream.”

Then came Nine, Her build so sickly and so frail The wind did seem to blow her ‘round, Like a ship’s great fabric sail.

She reeked of plague, and dust, and cold, And poor men owned her weight in gold.

“It shall be I who kills the Knave, For none is surer than the pox to send him to his grave. Mark my words that, when I die, I take the thief with me.”

Then came Ten, His chin held fierce and proud. His build was that of three strong men, His strength that of a crowd. How like an ox did he now seem, His face that of our darkest dreams!

“I shall the thief soon find, And when I do, Out of love to you, I’ll beat him out his mind.”

Now came the King, The ruler of the land. He stood there proud A dagger in his hand. He was her King, but now he to the Queen did bow And in so doing, his great devotion show.

“I shall seek this knave forever and a day; Mark my words, for his crimes Shall he with life’s-blood pay.

I’ll kill the fool, and beat him full and sore; When I’m done, God help me now, the knave shall steal no more.”

Last, there came the Ace, Her footsteps stately, calm, and slow, For though she desired to please the Queen, The Knave had been her beau,

“Ask of me what you will; I’ll scour the land, And find the Knave, And then shall I him kill.”

She left the palace, sword at her side Wishing in someone to confide; For though she’d sworn to slay the thief Her heart now trembled like a leaf.

And yet she longed to please the Queen And to always in her favour be. But how to do so, and not kill Him to whom she held no ill will?

How could she prevent his fate And yet how still her parents to placate?

She worried long, and watched the sunset fall Unsure if she would be any help at all; If she stayed here, and worried night and day Then would another come, and surely the knave slay.

She was but one of many, and not the strongest, nor the best, And yet she knew to find the Knave for her would be no test.

For he had shown her once A place he liked to go: A mountain cottage in the woods Buried deep in snow. In this place were they wont to hide, And only they the way did know.

Thence she went, Shivering in the cold, She knew no shelter but a tent, And always did she her sword hold.

She climbed each day, her on one thing bent: To find the Knave, as in the days of old.

At long last, she did find the place, A loathsome hovel upon the mountain’s face. Within, there glowed a yellow light A break in the darkness of the night.

She stepped to the door, And entered.

Within stood the knave, A tart in his hand; He was still breathing, Not yet found by the band. He gasped as he saw the Ace standing there His eyes growing round in the semblance of fear.

The Ace said nothing, but stepped further in, Not quite yet ready to punish Knave’s sin. He stepped back, too, his face turning white And Ace was quite scared that he’d die just of fright.

So she stopped moving, and closed the door, And turned to the Knave, as she had before.

“I’m sorry,” she said, but before she could speak, Knave knelt on the floor, timid and meek.

“Forgive me!” he shouted. “Please forgive me, my dear. Since I stole the tarts, I’ve known nothing but fear. Just forgive me this once, and I’ll never steal more.

Just one more chance – that’s all I ask for. Please don’t go through with your grisly task! Don’t you know that I loved you - That was never a mask!”

He bent down again, nose to the ground, But in her heart, the Ace no pity found.

With a swift, sharp movement, She unsheathed her blade And to the knave One last farewell bade

He cowered still, not daring to look And heard these last words, all true to the book.

"I'm sorry," said she, And brought the sword down "Your crime must be paid for And judgement is now."

She struck again, and blood splashed on her face "And besides," she said, "I'm Ace."