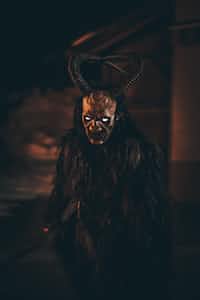 weirdo_216 all my stories are in the same universe
Autoplay OFF   •   a year ago
Transcript Use Images
Satan's orb goes missing and it's up to these misfits to find it. Will they become the team Satan wants them to be?
fiction welcome welcome to hell's academyfictionfantasywelcome to hellchapterschapter 1chapter1uperpowerssuperpowersuper power

The fragile figure went through the portal. His legs and hands shaking as he stood in the hot stepping stone. "Next," said a man with two red horns and dressed in a red tuxedo.

The man had blue eyes but it's horns were just little bumps. In hell horns meant everything. The bigger your horns the more powerful you were and more dark magic you where able to produce.

The frail boy horns where bigger then average, but even so he still thought of himself as not being strong. He was full of self doubt. One long bony arm opened the scorching door handle.

The door had been made of bones and skin of the previous devils. It was soft and had an unusual smell. As the fragile body stepped through the door, he's body started to vanish.

The boy looked around, all he could see was darkness. He smirked, "So this is how the devil's ash affects a normal hell citizen."

He kept on looking around as the darkness around him started to become more dense. He's breathing was getting unnatural as he's body started to float.

Each hair strand of the fragile body started bunching. Darkness around the pale boy started closing in as he's horns turned bigger. The devils energy was mixing with him.

Hair turned into purple tentacles, it was the colour of venom. The body tried to turn, heading for any solid piece of ground. Instead, the void around him started vanishing.

Thud! The boy fell on a hard ground. Around him was a beach full of rock. Suddenly, the fragile body started running not caring about the pain in his feet.

He kept on reaching, there it was the polished the polished. He picked it up with little strength as the stoner started shining it grew in length and size. It had turned into a nodachi.

The sword floated as liquid brass covered it, creating a scabbard. He swung the scabbard over his neck. The whole beach disappeared as the dark void invaded his personal space.

In front of him was a door. The same door as he entered through. He opened the door there it was. The hell's academy.

He thought to himself, realizing that he's demon curse, he's hair being tentacles, wasn't so bad when he saw other people having their head become chickens or getting crab hands.

The boy waited as all the 666 new student came out of the door, each and every one with a different demon curse. once everyone was out, Satan came on to the stage with a mike on his hands.

Satan spoke," Ladies and gentlemen, boys and girls. anything else or anything in between. humans and dogs. whatever you may be, welcome to Hell's academy," there was a sudden cheer in the crowd, Satan continued.

"You are the few student hand picked due to your tremendous hell power to come and join this school. There are 10 year groups that you will have work through in order to become demons.

Once you're all demons you may even become one of the seven deadly sins," a projector turned on as the wall behind him showing a slide," As demons you'll go through many promotions.

As time goes you may even make pacts with humans. As demons you'll also be able to freely move from the upper world to hell and sometimes go to business meetings in heaven.

But as demons you must always remember that the only reason we have powers is to get more people in hell rather then heaven.

The boy sat near the bar as he ordered a shot of vodka. The vodka tasted bitter as he heard someone calling his name. "Hugh, It's really you.

Oh my god I'm such a fan," The little stopped and catched a breather as he continues, "My name is Richard.

My demon curse by the looks of it is this turtle shell, since we're both new do you want to be friends?" said the boy. Hugh laughed.

Of course he would, in hell everything was about horn sizes and Hugh's where by far one of the biggest for his age as well as the fact that he was a demon in training.

Then he stared at Richard's horns. They were the same size as his , meaning their power was neck to neck.

Both of them must've started with horn sizes of 8 inch and then gained three inches from the door made of devils.

Hugh put out his hand and said, "Nice to meet you Richard, Let's be friends, also my demon curse is that my hair became tentacles." Richard shook his hands with glee.

"You know I'm fascinated by your work as a hitman, how you transfer people in heaven who are meant to be in hell back or the other way around, it's amazing," Hugh smiles and asked, "Thanks,

what do you do?" This was answered by a girl behind them. By the looks of it she was hyper as she said, "He's the president of the mad scientist society.

He's working on device so that demon can also make hell fires. I read all his books," The girl started shaking Richard's hand as much as she could.

By the looks of it the beautiful girl had white cat ears and a cat tail as her demon curse. Hugh looked at her horn, it was one foot as his shot glass dropped and his jaw opened.

" YO- you are the princess of blood-Samaria. What an honour to see you," he said as he bowed down- Hugh always looked up to . Richard realised and did the same.

"Please don't, I hate this.Can we just be normal friend, here's an idea why don't we show off our abilities in the training hall and see what hell powers the devil's door gave us," she asked.

Out of respect they followed onto the training hall. Richard spoke up," Do you guy's know how to activate your powers?" he asked.

Me and Samaria both shook our heads, they did not even have a single clue.

of they had to do the same thing. Hugh remember that the word he heard was 'Bakuhatsu'. "I want to first, me first," Samaria called out.

The two boys looked at each other not understanding why she wasn't showing any sort of dominance over the two boys.

After all not only way she a princess but she also had horns that where 1ft long. The boys moved put quite a distance away from her, encase her powers where really destructive.

Samaria stretched her muscles out and shouted, "lacerta" her whole body started to shape weirdly.

Firstly her skin started to turn purple, then she screamed as her jaw stretched ripping her flesh and making her bones grow unnaturally.

Her teeth were falling as a new pair of teeth dug out of her gums. Her body was the next victim, her breast shrunk in size as her flabby body started growing muscles.

She kept on screaming as her skin turned into scales. Her hands grew and her nails started turning into claws. She was screaming as she hurled blood out of her mouth.

Her legs grew masculine and her feet crouched. Her feet grew, as her flesh bled out, she kept on screaming.

Then her tail bone started growing at an abnormal rate as spikes poked out of her skin. Then her skin grew thicker. She kept on screaming as her eyes changes direction and her jaw changed.

Her tongue extended. The two boys looked with distraught when they realised what her powers where. Samaria looked at herself as she started laughing. The pain flew out of her body.

She became a lizard humanoid. She fused with a lizard. Samaria kept on looking at her purple skin. "Let me try it out, " she asked as she run toward the nearest wall.

The ability made her fast too, as she ran in abnormal rate. She started punching the wall.

The wall was strong, but it was no problem for Samaria' hell power as the whole wall started to collapse.

That was not all, she looked at her hands surprised to see that there was not even one scratch although she was breaking a wall. She said, "Lacerta," as her whole body went back to normal.

This time she did not scream as she realized that only the first transformation was difficult on her body. Richard decided to go second. He shouted, "Fi!" There he was as he's whole body started to be engulfed by bright white, blue flames. realize that he's ability allowed him to emit the second most hottest fire after hell fire. Richard said,

"Fi," as the flames that engulfed him died out. At this moment he was naked, whilst Samaria wrapped rags around her self.

Both of them wanted to go to their dorms but Hugh insisted them to stay and watch him do his hell power. It was Hugh's turn. "Baku-," he tried to say but was cut short by a demon teacher. The

demon looked at all three of them and threw some clothes to all three of them. He groaned, "If your going to test out or train your hell power at least wear the proper clothes, instead of sitting

there naked. I get this is hell and it's normal but there are some people around here who find it disgusting," He said in disgust. The three friends wore the clothes. They weared a pair of tracksuits.

Hugh's was blue, Samaria's was red and Richard's was green. The Demon teacher came back. Hugh realised what e's demon curse was, his whole neck was full of feathers. As the demon teacher approached as

he asked them to a game of dodgeball. Naturally they said yes. They followed the teacher into the gym closet, where the teacher had set up a magic circle. "This is my magic speciality,

soon you'll all be working on your own magic speciality, let me explain the rules of the game. Then we'll produce the balls. The game is simple it'll be like any other duel. A free for all, where

you have to make the one of the other players break a bone. Why? cause we demon, I'm sure you know, can only heal when one of our bones break. You can use anything in your disposal to do so. But

you must throw a ball at the person you are attacking then continue it with an attack. so then shall we get the started on making the magic?"