Commaful
Finding a Friend part one 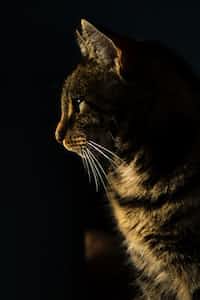 wafflecatz What goes around comes around
Autoplay OFF   •   a month ago
Transcript Use Images
Based off of the Warriors series. A remake of the one I posted three days ago.
ff warriors

Finding a Friend part one

I woke to someone shaking me awake. It was Mudfeather, as usual. "Wake up, you useless mouse-brain! Time for patrols!" he yelled straight into my ear. Quite unnecessary, in my opinion. I flattened my ears and glared at him. He rolled his eyes and exited the den, muttering under his breath.

I slowly rolled over to face the entrance of the den, and to my dismay, it was raining outside. I knew it was cold too, because it froze as it hit the ground. I sighed and stood up, careful to take my time making my way out of the dry den and into the soaking wet clearing.

Fernfoot, the deputy, was pacing in front of the meeting rock. When he saw me, he stopped and straightened up. "Now that everyone is here!" he yelled cheerfully. "It's time for patrols!" I sat down far away from my clanmates, careful not to make eye contact with any of them.

"Birchtail!" I heard Fernfoot yell. I looked up briefly and nodded. The deputy continued on. "You will lead a hunting patrol near the Windclan border. Take Mudfeather, Lilysong, and Lionwhisker with you. Split up if you need to cover more ground."

My heart stopped for a moment. I was leading a patrol? I didn't know how to lead a patrol! "You can go now," Fernfoot said. I slightly nodded and led the other three warriors through the bramble tunnel.

"We're splitting up," Mudfeather decided as soon as we exited camp. I didn't bother defending myself, because I knew it was useless. If I said anything, they would tease me, which is why I hardly talked.

But to my surprise, Lionwhisker whipped her head around and glared at Mudfeather, her pelt bushed up angrily. "You're not leading this patrol!" she snapped. "Whether or not we split up is up to Birchtail, got it?"

Mudfeather rolled his eyes. "Looks like little Birchtail needs his she-cat friend to stick up for him!" he taunted. Lilysong snicked. I flattened my ears. Then, I kept walking towards the Windclan border, caring less about whether or not anyone was following me.

Lionwhisker ended up beside me and started chatting away about how bossy Mudfeather was. I heard a low growl from behind us, clearly from Mudfeather himself. But he didn't say anything.

I nudged Lionwhisker and subtly pointed to a very angry Mudfeather. Lionwhisker rolled her eyes but shut her muzzle. Once we got much closer to the border, I stopped and started drawing in the dirt. A path that split in two. Lilysong tilted her head at it.

I kept drawing and drew a mouse on the ground, and then pointed to Mudfeather and Lilysong, and waved my tail in one direction. Then, I waved my tail the other direction. Lionwhisker nodded, but clearly the other two warriors didn't get it.

"It means," Lionwhisker said, putting a paw forward over the drawing, then moving it away. "We split up to hunt prey. Mudfeather and Lilysong-" she looked at me to see if she was right so far. I nodded and she kept going. "Go that way." she pointed in the same direction that I had pointed. "And me and Birchtail go that way." she pointed the other direction.

I nodded, glad someone could finally understand my picture drawings. I rubbed the image with my paw to make it disappear. Mudfeather went one direction with Lilysong, and me and Lionwhisker went the other.

As soon as we split up from the other two warriors, Lionwhisker launched into some story that I couldn't follow along with at all. She was talking too fast. I heard a rustle in the bushes, and I waved my tail for her to stop walking as did I.

I smelled rabbit, and even though we were supposed to fish, land prey was better than no prey. Lionwhisker crept slowly and quietly around it. I ran at it and drove it towards her, but it ran past her. She spun around and ran after it.

I ran after her. "Lionwhisker!" I yelled, my voice coming out squeaky and small. "You're going to cross the-" She didn't give me time to finish as she brought a paw down on the rabbit. She skidded over the border due to the ice.

I looked down. Thankfully, I wasn't on the wrong side of the border. But Lionwhisker was. She looked around for a moment, not moving. Before I could warn her again, Windclan patrol appeared out of nowhere and hurried to the border to investigate.

A young brown tom skidded to a stop, his paws sliding out from underneath him on the ice. A black she-cat rolled her eyes and stepped forward to face us. "Riverclan warriors," she growled. "What are you doing on our territory?"

I did not spend much time editing, sorry about that. Hope you enjoyed!