Commaful
I Shouldn't Have Gone to the Lock In 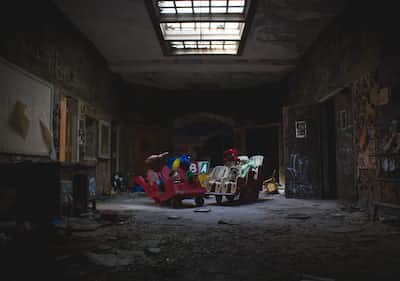 I Shouldn't Have Gone to the Lock In

by the urban author

The annual school lock in. Basically one big party for the juniors and seniors of Brawnson High School, sounds innocent and fun enough right? That's what I thought too.

The lock in has a bad reputation, parents in this town have been trying to get the whole event shut down for years. A mostly empty building provides a lot of opportunities for student suicides.

Sure, parents sued, but no matter what no court could (or would) find the school liable. And every year without fail, someone turned up dead. I don't know why my parents let me come here tonight.

"You'll be safe" they said, "you'll have your friends, and they even have counselors and clergy men there for you kids to talk to!" Which was true, at least the school was pretending to care.

And Matt and Amanda are the best friends I could ask for... But none of us were prepared for when the lights went out. "Something's gone wrong" the teachers and preachers whispered.

"Everyone, stay in the cafeteria!" They told us. They did a head count, everyone was present. "We'll have the power back on shortly!" We believed them. Then they locked themselves in the library.

"HEY!" I banged on the door, "What do you think you're doing?! You're supposed to be helping us!" I kicked and screamed, the clergymen just stood there, faces blank and emotionless. "I said-!"

A crash, then a snarl... deep and echoing, sending a chill through all our bones. Students whispered in panic, another girl screamed "Oh my God, oh my God!" tearfully, full panic in her voice.

We couldn't tell where the growling was coming from, it seemed to be everywhere. The clergymen formed a human wall, they chanted in Latin. Everyone was panicking, things were becoming chaotic.

Matt, ever the leader, quickly restored order. He stood on a table, "Okay! Since our guardians seem to be useless," he said pointedly, "We're going to have to turn the power on ourselves."

"What about the monster?!" someone asked, wow rumors spread fast. "There is no monster!" Matt said, "It was probably the sound of the machinery powering down." the crowd wasn't convinced.

I stood on the table next to him, "If you're all too afraid I'll go, I know how to work a fuse box." That was a total lie, but it can't be that hard right?

Amanda yanked my arm, "You can't go alone, I'll go with you" she said. "Alright, you two go to the basement," Matt said, "I'll see if I can get the teachers out of the library." Simple right?

We passed the library on the way to the basement, the clergy were still chanting, only now it was more constant. I don't now much about Latin but I did manage to catch one thing: "Sacrifice."

I've seen horror movies, I know the one rule: don't go in the basement. But this isn't a horror movie, this is real life. The teachers must be playing some sick prank on us. Right?

The basement stairs were almost pitch black, three steps down then darkness. Amanda and I used our phones to light the way. The snarling sound seemed louder than ever.

"Shouldn't all the machines have shut down by now?" I asked her, "Maybe some of them have their own reserve power or something." We were silenced by something heavy moving in the darkness.

A growl, deep and menacing,

and unlike any animal I've ever heard. We wasted no time booking it down the stairs. Suddenly Amanda wasn't running next to me anymore, she screamed as it took her but it was cut short swiftly.

I ran like a I never ran before, the stairs seemed to go on forever (or was I just too slow?) I didn't even know the school went down this far (what happened to my light?) at some point I fell.

I fell hard, my phone crashed somewhere to the side, the light broken and useless. Something in the back of my mind told me I was hurt, but I got up anyway, I could hear it.

It's footsteps were heavy, and they seemed to be everywhere. I kept running down the stairs, tripping in the pitch darkness but avoiding any more falls, it seemed to be both ahead and behind me.

I finally found the end of the line, and ran smack into a door. I could hear it, right behind me (or was it behind the door?)my senses were muddy, I was blind, its horrible sounds were everywhere

I yanked the door open

There was a horrid screeching sound as it leaped towards me. The last thing I felt the creature wrapping its monstrous hands around my neck before it snapped.