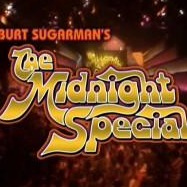 The Midnight Special was a late-night TV concert series that aired in the 70s.

This was back before the Internet and even cable TV when most people only had 3 TV channels to choose from, not including PBS.

This was also when TV stations would stop broadcasting at midnight and, after playing the National Anthem, a "test pattern" would show until the morning.

But The Midnight Special aired after midnight every Friday night. The show was hosted by legendary radio personality the late Wolfman Jack.

The show featured popular musical acts of the day performing LIVE & featured very little lip-synching like they do today.

It was kind of like the "live" show MTV Unplugged back when the "music" channel STILL played actual MUSIC.

To be honest, I'm not sure a show like that would work today since many of today's "artists" rely on things like lip-synching & autotune.

So am I suggesting musical acts back then were more "talented" than they are now, you might be asking?

They were certainly, shall we say, different, if you know what I mean!