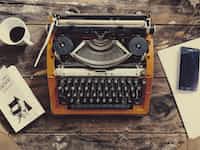 When I first came to clean for Mrs. Orange, my first impression of her was the house in which she lived. It sat on a bluff overlooking the ocean with a beautiful view.

It looked like an old Victorian house, with some modern changes

I knocked, but was only greeted with silence. Wondering whether to turn and leave, or wait, I chose instead to try the door on a random impulse.

Upon entering, I found myself in a somewhat dark corridor. I was losing my confidence and curiosity and was about to turn around, when I heard a soft scratching noise. I followed it hesitantly.

After rounding the corner, I was greeted by a strange scene. There was a middle-aged woman sitting atop a scaffold, hunched over with a pen, and writing on the white wall paper.

Half of the wall was already covered with marks. The room was a large dining room, with a beautiful view of the ocean.

The furniture was covered with white curtains, and ladders of various sizes cluttered the corners.

After taking it all in as best I could, I said hello, and she turned around. Her face was kind, but her air was rather mysterious.

Little whisps of curled hair floated around her forehead, like clouds. Her eyes were green, but were too large for her face.

Her nose and mouth were prefectly shaped, and she wore a white dress with a green vest. It occured to me, looking at her, that her appearance was the perfect cross between a female gnome and an elf.

After we had had a moment to look at one another in silence, I introduced myself as her potential new cleaner. She gave a small smile and laughed.

"You are astonished that I write on my walls?"

I replied that I was.

"I am a writer," she explained, "of new and strange proportions." Then, changing the subject, said, "I hope you will stay to clean."

"Not many of my cleaners have stayed for very long; they have never learned to clean my house properly."

"Come and see for yourself. Then you can decide if you want to take the job or not."

I followed her into the grand living room, which had a 30-foot tall ceiling. It contained different species of South American plants and trees.

She pointed out to me a beautiful white Queen of the Night, Zebra Plant, Walking Iris, and many imposing Tower Trees.

The room was particularly hot, to suit the tropical tastes of these plants, and the ceiling was made of glass to let in more sunshine.

Among the plants and the fountain in the center of the room, were animals native to South America: stuffed monkeys, parrots, anacondas, sloths, and jaguars.

Completing the collection were Harpy Eagles soaring from the tall trees. I wondered where she got such specimens, but dared not ask, being it was my first day of work.

The rest of the house was just as grand, each decorated with natural plants, birds, and animals from each of the continents around the world.

Her kitchen's theme was the Middle East, complete with bright rugs, and the smell of spices. The bathroom, of the ocean, with a small replica of a blue whale hanging from the ceiling.

Her spare rooms were Africa, Australia, and Asia, respectively. The dining room was of Europe. All of it was stunning, and I grew more amazed as we entered each room.

Then, we climbed a set of old stairs to the attic. I must confess that I was not prepared in the least for what awaited me there. At the top, Mrs.

Orange turned to me, held up a key, and said, "My most prized possession waits behind this door. Everything downstairs is but mere rubbish to me compared to this, except, perhaps, for my work.

One day, one day, my work may be called worthy enough to join the others."

With that, the door swung open, and I gasped. The room was not a stuffy, cluttered attic, but a beautiful library. The shelves were intricately carved of wood and lined the walls.

The rest of the room had spinning book cases, two chairs, a table with a tea set, and a polar bear rug.

The titles read: "Treasure Island", "The Call of the Wild", "Robinson Crusoe," "The Scarlet Pimpernel," "Black Beauty," "Romeo and Juliet," and "Pride and Prejudice".

These were the greatest of the great. I tried to find an obscure or newer book, but could not. Each were worn, and though some were newer, most had that wonderful, old book smell.

"I have sought out the best of the best." Mrs. Orange said, picking up a book, and running her fingers down its cover.

"The only way to learn and craft your art is to better understand those who went before; those who paved the way and whose works have stood the test of time. Any others are worthless.

Seek out the great, and that is all one's work can be, because to the mind, no others exist."

She put the book back and turned to me. "Will you have the job?"

"Good. When you are finished with your cleaning duties, I will give you your normal pay as well as a few hours in here reading, if you so choose."

I ended up staying there for fifteen years. In the process of cleaning Mrs. Orange's house, I learned about her.

Her family had become wealthy from sailing and trading before the two World Wars, and had continued to do so after them, working for different shipping companies.

She was the last of her family, and chose to spend her days writing. Not only did she write stories, but also about her family's history. This, I never saw. She kept it secret.

Just like her name. Her family's name was not Orange, and there had never been a family member with such a name.

She did tell me how she chose her pen name. She had eaten an orange, left the peel overnight, and the next morning, it had become brittle.

Naturally, she wondered if the inside could be written on, and when she found that it could, she was thrilled. So, Mrs. Orange was born.

I read the books in her library, and we would discuss them over tea. She was a wonderful thinker, as well as a writer.

But though she took pride in her work, the works themselves did not measure up to her standards of the great masters she worshiped.

Some days, she would be on the verge of tearing everything to pieces, and throwing it into the fire.

It took everything on my part to prevent this from happening "This world would be better off without my nonsense," she would say, but I would point out the bits of genius in her words,

and she would sigh and again start writing.

So the years continued to pass, and we grew closer. She became a close friend for me, and I think I became like family to her. She invited me to come and stay with her. I accepted.

She was growing older and needed my help more often.

She hired a lawyer and made her will. I was away when this happened. When I came back, the will was shown to me, but I was not allowed to read it.

A month passed. Then two. She grew more feeble. I saw her strength leave her, then, one day, she was gone.

The day of her death, the lawyer came back, opened the will, and I saw that she had left me everything, and she had adopted me into the family.

She left me in possession of her writing, and I felt the responsibility of promoting and publishing it. But she commanded me in her will that the house should not be turned into a museum.

If I were to move, I was not to sell it, but burn it with everything inside. She did not want the world to see her house, her written walls, her library, or any of her other creations.

I did end up publishing her works, and the world has received them favorably. I only regret that she is not alive to see the success of her sweat, tears, doubts, fears, and hopes.

So, here I, Miss Orange, lovingly dedicate this in memory of Mrs. Orange.