Commaful
The Difference Between Devils and Angels (chapter 1.1) 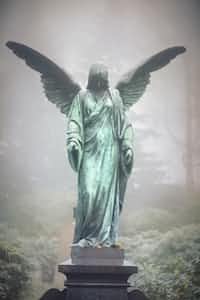 sonofthemorning Community member
Autoplay OFF   •   8 months ago
Transcript Use Images
For the prologue go here: https://commaful.com/play... With it being the middle of October and all I should have expected it to be much colder. I was only wearing a thin hoodie over my graphic tee.
fiction fictionangelsfallen angelsfallenangelsluciferromancelgbtq

The Difference Between Devils and Angels (chapter 1.1)

For the prologue go here: https://commaful.com/play/sonofthemorning/the-difference-between-devils-and-angels-prologue/?sh=1

With it being the middle of October and all I should have expected it to be much colder. I was only wearing a thin hoodie over my graphic tee.

Despite what people have told me jeans do not make good insulating material. The cold, late fall breeze just makes the denim colder.

I shiver, berating my carelessness.

At least I brought a coat even if it isn't exactly weather resistant, or even outside resistant.

Walking to the nearest bus stop wasn't ideal since I live pretty fuckin far from one. But the school bus won't come all the way out here and there's no one who cares enough to give me a ride.

Sure I've got friends, tons of em, I'm a friendly dude. But living in a town like this...

All the people I think are my friends now would turn on me if they knew. I tried not to get too close to people lest they find out about me.

There's always the advantage of knowing how people expect you to be and not to be, because if you know what they are expecting you can give it to them and then you won't stand out.

Sometimes I hate my talent for acting. I just wanted to be myself but it just wasn't possible here.

All I could hope for is that my talent for graphic design and fashion will be enough to get me out of Mistfall and to somewhere better.

I think about this on my way into town. I do this every morning. I don't know why. Maybe I just want to make sure I never forget. That I'm different. That I need to make sure I hide what I am.

Mistfall is a town that is pretty unique but we don't get enough publicity for anyone but locals to know anything about it. During the day it's quite sunny and rains pretty infrequently.

There's a number of waterfalls in the mountains surrounding the city which lies at the bottom of a deep valley. This gives the town the second part of its name.

But it's the first part of the town's name that has always intrigued me. Every night, despite weather, temperature or other natural circumstances, a thick mist flows over the town.

The mist is so deep that it hinders all travel. Mistfall seems dead every night because no one dares go out. They even have myths about demons and various monster's living in the mist.

I don't believe in demons or monsters, at least not inhuman monsters. I like to walk around in the mist.

I have a set path through the woods with various markers on the ground so I don't lose my way. It's my favorite time of the day. Even the nocturnal animals fall silent in the mist.

The quiet is so deep that it feels like you can't even talk.

I finally arrive at the bus stop, yawning. Thinking of my mist walks always makes me sleepy as I sometimes fall asleep out there, at least when it is warmer.

It takes an hour to walk here and then we're still forty-five minutes away from the school, not accounting for all the kids we still have to pick up.

I wave to the two kids I see coming towards me.

"Hey Riley!" The taller of the two hollars.

"Hi Kal." I fistbump Kal and look curiously at the boy walking next to him. Kal is a pretty tall dude, moderately handsome, and an obvious farm boy.

His hair is bleached a golden blonde color from all the time he spends in the sun. His eyes are a chestnut brown. He still hasn't grown into his height so he looks like a green bean.

I must have been staring at the new guy because Kal jumps to introduce him.

"Oh right!" He exclaims. "This is Gabriel, my cousin. Gabriel meet my bro Riley!"

Gabriel could not be more different from Kal. Gabriel's hair is jet black, his eyes are such a light brown they could have been golden.

Where Kal is a green bean Gabriel looks like a professional athlete. Under his t-shirt I could see his muscles bulge slightly.

His skin was a warm color that was not quite tan but he wasn't pale either. He was almost olive toned. I shot Kal a skeptical look.

"Yeah, yeah, I know. We look nothing alike, even for cousins!"

"Hello Gabriel nice to meet you." I extended my arm for a handshake. Gabriel eyed my hand suspiciously before taking it. He shook it twice and let go without a word.

Remember TIP TOP: make a new paragraph when it changes topic, (something that starts with I, maybe inner dialog), place, time, opinion, and when a new person talks.

We then waited for the bus to come pick us up and take us to the hell that was Mistfall High. While we were waiting I caught Gabriel looking at me several times.

The last time I caught him looking at me I gave him a sharp look and he quit it.

"So Gabriel did you just move here? Or are you just visiting?" I asked Gabriel to clear the air.

He was silent almost long enough that I was beginning to think that he was ignoring me, but then he answered.

"I am... living with my cousin for a time and wish to continue my education while I am here." His voice had a deep timber that made me shiver.

Somehow he saw me shiver and gave me a curious look. "Are you cold Riley?"

"Eh, maybe a little." I shook my head embarrassed. "I thought I could tough it out, but it's pretty damn cold."

His eyes made me nervous, they were so bright that they almost seemed to glow. They also seemed to see right through me, it was unsettling yet captivating.

I couldn't help but stare into them and think about how handsome and attractive he was. Gabriel held my gaze for a few long moments before he smiled dazzlingly at me.

His teeth were such a bright white it was a wonder that I wasn't blinded. To think that such a beautiful person would be smiling at me...

I turned away from him and blushed. I was saved from embarrassing myself by the bus and gratefully climbed aboard. I was closely followed by Gabriel then Kal.

I was acutely aware of the tall boy's presence. I blushed again and quickly sat down.

Even though Mistfall is on the smaller side there is a noticeable abundance of citizens but a significant lack of buses.

We must all pack in three to a seat in order to fit all the students as well as get to school on time.

The girls sit on each other's laps for the whole ride but it is a rare practice for the boys.

I certainly never even entertain the thought of sitting on another boy's lap, for I want it too much for it to be safe.

I thought about this as Gabriel sat beside me. He was so big that there was no way that Kal could fit beside us.

I had pressed myself as close to the window, with my backpack on my lap, as possible but there was still not enough room for Kal.

Gabriel, seeing the predicament, quickly nudged me until I was standing, scooted underneath me and tugged me onto his lap. My face burned so hotly I nearly wondered if it was on fire.

Kal sat down beside us and smirked at me. I wrinkled my nose at him.

I sat stiffly on Gabriel's lap and was aware of every single student's gaze as they looked at us.

Do they suspect me? Is this innocent action enough to clue them in?

I was getting more and more agitated and fidgety as the bus seemed to start off for the school at a snail's pace. Suddenly I felt a hand on my waist and I froze.

His hand was warm and my skin tingled as I felt the weight of it through my clothes.

"Relax," Gabriel whispered in my ear huskily. "You're more suspicious the more you look like you are. Lean back against me and pretend it's normal. They aren't paying attention to us anyway."

Gabriel's voice was so hypnotic that I did exactly what I was told. I relaxed against the boy I barely knew and tried to pretend everything was normal, but I couldn't hide my blush.

"There you go that's better isn't it?"

I nodded my head. Gabriel didn't remove his hand on my waist but gave it a quick squeeze.

I can't believe this is happening! I am sitting on a complete hotty's lap!

Gabriel let out a soft chuckle in my ear. It was a charming, husky sound. It was so pleasant that I relaxed further into Gabriel's chest and sighed.

The rest of the bus ride was so peaceful I almost didn't notice the second new face I would have seen that day. The only reason I did notice him was because Gabriel stiffened under me.

The sensation was so odd that I looked up from my musings and saw the new student. He was dark haired like Gabriel but that was where the similarities stopped.

His eyes were a piercing gray that were nearly as bright as silver. His skin was so pale I wondered if he had ever seen the sun. He was dressed in all black, but it looked good on him.

He didn't look goth nor emo, but more like a bad boy, a rebel.

His black jeans were ripped fashionably, his shirt bore a skull, and his shoes were big black boots that looked as if they had stomped on many unfortunate souls.

They had numerous scuff marks and scratches. They even had a bunch of dried mud on them. His teeth were just as white, if not more so, as Gabriel's.

His overall appearance gave me a modern Vampire vibe. His canines were even noticeably pointed!