Commaful
Genesis 1:1 - let there be food 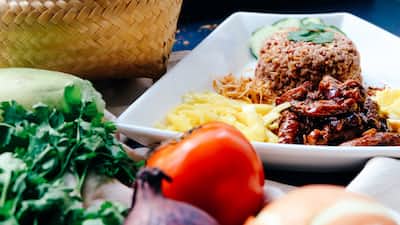 In the beginning, there was nothing.

And He saw there was nothing, and said, “Let there be food.”

But the fridge remained empty. I mean, come on, He wasn’t a magician.

So He dragged himself out of His pajamas, drove to the supermarket, bought some things, beer especially, and resolved to cook.

On the first day, He made toast. And He picked off the burnt edges, spread the butter, and saw that it was good.

On the second day, He made cereal. Pouring the milk into the bowl of wheat-o’s, He took pride in His progress. This was His creation. Food blogs were overrated. This was His.

On the third day, He experimented with bird fowl and creatures of the air, including deli turkey, turkey bacon, smoked turkey, and chicken. Mainly chicken.

And He cracked the seed of chicken and fried it in a pan and put it on His toast.

Then He cut up the breast of chicken and seasoned it with ketchup—man’s red sauce—and ate it, and saw that it was good. So good, in fact, that He ate it every, single, day that week.

Starving? Who's starving? Not He!

On the fourth day, someone left sandwiches in the lounge. He thought they were free. They looked free, anyway.

And on the fifth day, He made rice. And He opened up the rice cooker and let the steam rise up to His face. With a paddle he scooped up the grains, and saw that it was good.

Was rice usually this crunchy? Who cares! Certainly not He! And rice became the new toast.

On the sixth day, His ambitions got the better of Him. He bought vegetables and fruits, and chopped all kinds of colorful things with his knife.

Tossing them in the pan, he added beef and pork and dashed in salt and pepper and stirred as it sizzled. Soon the air became thick with savory smells and He was proud of what was to come.

And then the smoke detector went off.

The seventh day He ordered pizza. Christ, He needed a break.