Commaful
My first day at Hogwarts 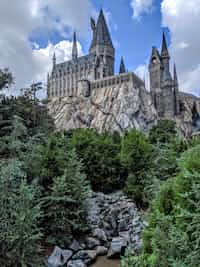 sofiechan Followers goal: 20
Autoplay OFF   •   8 months ago
Transcript Use Images
Ever wonder what it is like to attend Hogwarts? This story describes Sofie’s first day at Hogwarts, read to find out more.
fanfiction harry potterfanfictionfan fictionfan ficfanficpotterfanfic

My first day at Hogwarts

Sofie waited nervously as she stood between platforms 9 and 10. Her parents stood behind her, urging her to go forward.

Taking a deep breath, she walked slowly toward the wall and broke into a run. The moment she was about to touch the wall, she faltered but did not stop.

Instead of hitting hard, she passed right through the wall and ended up at a very busy platform with parents and their children. A sign on a nearby pillar says platform 9 3/4.

Her parent joined her a minute later and they just stood at the entrance, starting at the other people.

Just as her mother opened her mouth to say something, someone bumped into them, making Sofie's luggage on the trolley fall to the floor.

A boy about her age with sandy blonde hair picked her luggage up and place it back on the trolley.

'Hi, I'm Jonathan Hill, sorry about bumping into you, it's my first year at Hogwarts!' The boy said while retrieving his luggage from two scrowling parents.

Sofie pushed her trolley a few inches away from her talking parents and replied in a small voice, 'I'm Sofie Chan, it's my first year too! I'll forgive you for bumping into me.

Anyway, why are your parents glaring at you?' But before Jonathan could answer, a loud cling clang interrupted them.

A huge red train came into view and all of the parents around them stopped at what they were doing and pushed their kids forward.

Her parents stopped talking and pulled her away from Jonathan and spoke quietly to her, 'Sofie, do your best at your school work and remember, whatever happens, don't forget our family motto.

Write to us every week!' Even though her mom didn't say it, she knew they wanted me to be in Slytherin, just like them.

She walked toward the train with my luggage and heaved them on board. The train was huge with a lot of compartments and a lot of people.

Sofie stopped at a compartment with only three people in it, she pushed open the door gently and found her new friend Jonathan inside. He was sitting with two girls, one who also had sandy hair.

He didn't saw her until she started to put my things down. 'Sofie! Feel free to sit with us, oh never mind, you've already done that.

' He was so surprised that he almost hit his head on the storing cabinet above him. Sofie chuckled and gestured toward the two girls.

'Oh, where are my manners, this is my twin sister, Romilda, and her best friend, Cindy.

Jonathan replied awkwardly, 'Girls, this is my new friend, Sofie, whom I bumped in, literally, on the platform.

' Romilda waved cheerfully and patted at the seat next to her, 'Hey! Come sit with us! Are you nervous about the sorting? I am freaking out right now!'

The rest of the journey was just the same, simple banter and the two girls' cheerful aroma. The train skidded to a stop at the end of the line.

She followed her three new friends as they piled out of the compartment toward the train door. Sofie was stunted when she first looked at the wonderful view of the castle.

A magnificent castle loomed over an equally big and beautiful lake.

A giant of man walked toward them and a few students actually cowered away from him, but Sofie knew who he was, her parents mentioned about him.

Sofie walked toward the man and said in a small voice, 'You must be Hagrid.' She turned back to the rest of the students who were looking at her in astonishment.

'This is Hagrid, the groundskeeper at Hogwarts.' Hagrid still looked cheerful and pulled up a boat from behind him, 'Right ,you are. I am goin' to get you first years to the castle by boat.

' A few older students standing behind him told them to line up. Sofie wasn't paying attention as she was too busy studying the castle.

She wasn't sure where they were but she guessed somewhere in Scotland.

The boat ride only took a few minutes. A woman about the age of 60 waited at the castle entrance. She wore a green robe and her silver-lined hair was tied up in a tight bun.

'Welcome, to Hogwarts School of Witchcraft and Wizardry. Follow me, first years.' She announced as they climbed out of the boats. Sofie was among the first in the long line.

Her head never stopped turning as they pass through moving portraits and statues. Finally, they arrived at the great hall, where a lot of students already seated in four long tables.

Sofie stood nervously as she stood in the middle of the room with the other first years as the middle-aged woman whose name she learned is Headmistress Mcgonnagall.

The headmistress called names and girls and boys walked forward to have an old wizard hat placed on their head.

'Sofie Chan.' Headmistress McGonagall called her name and Sofie walked toward the hat and the stool nervously.

As the hat was placed on her head, she heard a voice inside her head and was shocked when she realised it was the hat.

Ah, Miss Chan, I can sense you as a brave and loyal person, you would make a great Gryffindor. I can also sense your love for reading and your intelligence, Ravenclaw suits you too.

Slytherin, you are cunning and you often feel the need for revenge. But above all of them, you have a kind heart and helpful personality, you would fit in best in Hufflepuff.

The last word, Hufflepuff was announced to the whole school sitting. Headmistress McGonagall lifted the hat off and she walked slowly to a group of grinning girls and boys in yellow.

She sat down at the nearest empty spot and tried to concentrate on the rest of the sorting ceremony but was distracted by her many thoughts on her new house.

Sofie couldn't concentrate on the rest of the feast,

she was only brought out of her lands of thoughts as a Hufflepuff prefect patted her on the shoulder did she realise the feast was over and she is told to line up.

She followed the other first year Hufflepuff and was led to the Hufflepuff Common Room located in the dungeons.

The prefect briefly explained the use of dorms and the rules of the common room, and she got to a dorm room with three other first years.

Sofie was absolutely tired of all the things that happened, but before she could flop on the bed and sleep,

a energetic girl from the bed next to her jumped in front of her and started to introduce herself in a very fast manner.

'Hi, I am Anna Chase, nice to meet you, I'm so excited to start at Hogwarts! What about you?' Anna sat down on Sofie's bed.

'I am Sofie Chan and I am very tired, please get off my bed, I want to sleep.' Sofie didn't meant to be rude but it is getting late and Sofie is really sleepy.

Anna was shocked at Sofie's response but stopped bothering her and left her to sleep in peace.

Sofie woke up with bright sunlight shining through the window. One of the girls were already awake and was changing into her robes. Sofie washed her face and changed into her uniform.

At 8:30, Sofie walked to the great hall alone. She sat at her spot yesterday and jumped out of her skin when food magically appeared on the table in front of her.

As she ate her breakfast, Headmistress McGonagall distributed the schedule for the following year. She flipped over the parchment and read her schedule.

She only had three lessons that day and her first lessons started in 15 minutes, she'd better eat her breakfast fast and get to the classroom, she didn't want to be late for her first lesson.

Sofie carried her books, notebook and her magical stationeries to her first Charms lesson. The classroom door was open and a few excited students were already inside.

She chose a seat in the middle of the classroom and placed her notebook on the table.

As more students piled into the classroom, did she realise a professor had already arrived, he is just too short for everyone to notice him.

Jonathan came into the classroom with the two girls she met on the train.

She hadn't talked to them since the Hogwarts express, a few minutes of talk and she already knew that Jonathan was sorted into Ravenclaw and the two other girls were sorted into Gryffindor.

But before they could further talk, Professor Flitwick called for their attention and began to introduce himself, 'Hello,

I am Professor Flitwick and I will be your charms professor for the next 7 years. This is probably your first ever lesson here at Hogwarts so we are taking this lesson easy.

I would like you to introduce yourself, name, house and age.' Professor Flitwick pointed to a random student, conveniently Sofie.

Sofie tends to be a bit shy when meeting new people but it isn't time to back out, the whole class has been looking at her.

She stood up and spoke in the loudest voice she could muster in that situation, which wasn't much. 'Hi, my name is Sofie Chan, I am from Hufflepuff, I am 11 years old.

' She sat back down and pretended to reorganise her notebooks. The introductions lasted for half of the lesson, they covered the wand lighting charm and the wand extinguishing charm.

The lesson wasn't hard and Sofie diligently wrote notes of the lesson for her end of year exam.

The lesson flew past like a blur and their first lesson soon ended, it wasn't an eventful one but it was enough for a first.

She walked to her next lesson, Tranfiguration while thinking and dat-dreaming about her whole wizarding future.