Commaful
Raydorn: The War in the Black (Chapter 2. Pt 6) 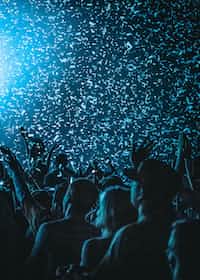 smethingcentral Love writing, somethingcentral.com
Autoplay OFF   •   2 months ago
Transcript Use Images
The story opens at the beginning of a war between the three great nations of Western Gronina. They all want the largest mercenary army on the continent, the Black Legion. Whichever country, Raydorn, Krone, or Susanna, gains their help, will likely win the war above all others. The powers that be behind the three nations agreeing that none of them are willing to take that chance. Together, they hatch a scheme to betray and slaughter most of the Black Legion.

Now on the run from the only homes they’ve ever known, the remaining leaders of the Black Legion must rebuild their mercenary army before they’re wiped out. And above all, they must do so before the ones behind the war complete their terrible scheme to take over Gronina. But how can a bunch of people who kill for money possibly come to trust each other? How can they possibly learn to do what’s right? The only way to find out is by fighting against the world. Here’s hoping they survive.
fiction actionmedieval fantasyafrican fantasychinese fantasyroman fantasy

"That's my name, don't wear it out now," Malum said as he sheathed his sword. He took a step only to notice how Stygis still struggled to stand up and put his foot on his back to stop that.

"Hmm, I've never met someone who could fight my paralyzing poison so hard."

"But he is beaten, and we have won the day."

That declaration of victory had Stygis looking out over at the sea of people around him. He had tuned them out, focused on fighting Starshield.

The Wolfhunter found himself slowly surrounded by the best of the legion. Yet, here he was on the ground, with a wound on his back that infected every muscle of his body.

Stygis couldn't quite accept it yet, reaching out for the ax that laid by Jack's feet, trying to call it to him as every muscle in his body burned.

His ax moved just a bit, then a foot came down on it.

The man named, Quintus, set his foot on it, and declared that, "The battle is won, brave Wolfhunter, better to accept defeat than to risk your life."

In turn, Stygis growled and found a sword next to his face.

Malum put pressure on Stygis's back as he squatted closer to the Wolfhunter's level.

"Make no mistake," the assassin whispered into his ear, "you survive only by our grace. This was a show, proof that blood can be bought with coin just as well as love.

The nationalistic ardor that you fight with couldn't overcome our simple greed, and in a world where that is true... what reason could you possibly have to fight?"

"Remove your foot, Malum," Quintus told the assassin, "he is beaten, and we have a crowd to wave and smile to."

Lucy was already waving towards the adoring fans. "Yes, boys, smile and wave."

Stygis felt the air flood back into his lungs when Malum stepped off him. Like that, none of them cared about the Wolfhunter anymore.

They turned toward the crowd, the one they felt they needed to sell themselves to the most.

Astrid asked, "Is it because of the mask?" to which Lucy only gave her a confused glance. "Well, he can't smile through a mask."

"How does a mask stop him from waving?"

Stygis looked over at them, these faces and names he did not know stood alongside Jack Starshield.

Quintus and Lucy turned around, looking curiously at the man. It was hard to ignore someone who fought against his own body just to speak.

But it was Malum who answered him.

"Why tell you?" he said. "You who will drink the night away and forget our names come morning."

"No..." Stygis gasped as he struggled to gain control of his muscles, those which threatened to collapse under their own weight. "I promise you," he began to swear, "not even...

all the ale in the world... will make me forget you... those I will grow strong enough to kill."

Stygis gaped at the foot before him, and his eyes raged at the point of the sword as well.

The Wolfhunter craned his head to find himself in the shadow of Jack Starshield, and all that which threatened to drive him mad.

"We are legion," Quintus said, as he took Jack by the shoulder to drag him away. One by one, they all began to walk after them. "That is all you need know."

And with those words, Stygis felt justified with his hate.

He watched them walk to their pit, as the next rich Earl among many walked out with a horn for the crowd.

He clapped for the festivities and the entertainment, to which most of the crowd joined in, a unifying moment for the three nations at war.

Now came for the part where they each had to scream their loudest.

"The Tribus Senso Eilean is over!" Harris Thorn shouted, which was met by boos though that was to be expected.

"I know, I know, you wanted more, and why shouldn't you get it? Well, you can, some of you can.

"War is terrible for our health, but so is beer, and that doesn't stop anyone from drinking. If you want the Legion to protect you from the enemy beside you, scream to your leaders.

Scream their names for them to finally put your taxes to good use, and protect you the way only the Black Legion can.

"Scream, and let the royals know, that victory comes in black."