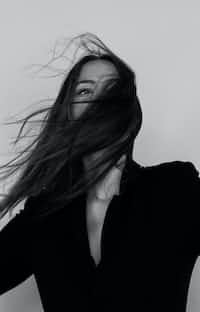 Her long, pretty black hair was the one that brought her doom.

One stranger was enough to destroy her Just one touch was enough.

And she cut her hair off but it grew

And she cut her hair off but it grew and kept growing.

She felt suffocated so she went to breathe fresh air but the tightening around her neck didn't stop.

She struggled and then realized that it was her hair that had coiled around her neck and was choking her but it was too late as it already had a firm grip on her neck.

Strands of her hair tightened around her hands as well when she tried to pull them away from her neck and began cutting through her skin.

She kept fighting for her life but her wrists were now slashed and so was her neck. And she realized with horror, that this is the end.

Her last thought as she gasped and breathed her last breath, was her once long, pretty black hair.