Commaful
The Horrible Life of a Superhero chapter 7 part 2 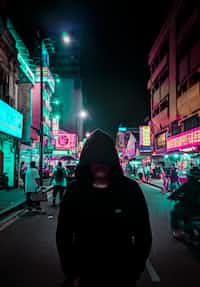 sinkingfox Community member
Autoplay OFF   •   5 months ago
Transcript Use Images
I reddened, but I said, "Maybe so, but you can't prove it. Besides, you're not supposed to be here either" "Actually, I can. You called 'who' there?' when you first saw me, indicating that you weren't supposed to be here. What's more, your pulse jumped, and you reddened.

The Horrible Life of a Superhero chapter 7 part 2

I reddened, but I said, "Maybe so, but you can't prove it. Besides, you're not supposed to be here either"

"Actually, I can. You called 'who's there?' when you first saw me, indicating that you weren't supposed to be here. What's more, your pulse jumped, and you reddened.

You clearly aren't supposed to be here, and you lied to me"

Shocked, I let my guard down. Which, as we all know, is a fatal mistake. He lunged, his foot catching my legs to send me tumbling, his hand darting for a punch to the stomach.

I managed to catch his hand, but not his foot, and I would have gone tumbling down were it not for the very handy wall behind me.

I pushed against it, stumbling forward and away, but he was already there. He jabbed one elbow into my gut, and another one forcing me back against the wall.

He pushed his arm against my neck, choking me.

I gagged, shaking my hand desperately, trying to make my talents work.

Desperately, I glanced from side to side, hoping for someone, anyone, but the same good luck that had caused no one to see me before had turned into my downfall.

I felt a tingle in my palm. Celebrating inside, I jammed my hand into his stomach, and released the pressure.

A blast of darkness sent him flying back against the wall. But as I gasped for air, he backflipped off the wall, and drew a knife out of nowhere.

He advanced, the edge of the blade glinting dangerously. I gaped at him in disbelief. How'd he manage to get that?

I backed up, stumbling a little and turned, sprinting for the next turn. I managed to make it almost ten metres before he cornered me, running up the wall, and leaping in front of me.

He pressed the blade against my throat. His eyes held the tiniest hint of remorse, even sadness, but that didn't seem to matter.

I closed my eyes and prayed for a miracle, knowing I was about to die. Any and all pressure in my hands had since been released, and I was out of moves. Dread filled my stomach.

Then, my miracle happened. A swell of water threw him off of me, his blade nicking my throat but missing any vital arteries. I dropped to the floor, narrowly missing being swept up by the wave.

I panted, drawing in breath after breath, not believing how close I had been to death. I twisted, from my crumpled position on the floor to see Maven walking down the corridor.

He seemed to spark with power, his arms held in a fist position as they appeared to glow.

Under any other circumstance I would have hated to see him appear from nowhere and save the day, but it had been my butt he had saved. I had nothing but gratitude for him now.

Maven narrowed his eyes at new kid-he literally tried to murder me and I still don't know his name- who had not managed to flip against the wall for this blast.

He was slowly getting to his feet, his form flickering. His ankles had already sunk into the floor, which is what happens when phasers lose control.

He scowled at us and yanked his legs back up to level. His knife was lying on the floor. Maven was fully focused on new kid, so I pilfered it, tucking it into one of my many hidden pockets.

"What are you doing, Jackson?" Maven demanded, his voice radiating anger.

For a second, I was confused. Who was this Jackson, and where was he? And then it hit me. New kid was named Jackson! Of course Maven knew his name.

I scrambled to my feet, anger surging through me. Jackson had tried to kill me, and had probably killed Annabelle as well.

I resisted the urge to draw out my knife and point it at Jackson, who was staring defiantly at Maven.

"Did you kill Annabelle?" I interrogated

He stared at me, amusement flickering in his eyes. He leaned back against the wall as though he wasn't in a desperate situation. For some reason, that made me urious.

Anger surged through me as I screamed, "DID YOU KILL ANNABELLE!"

He smiled faintly, and said, "No."

I thought he was done for a second, and ready to strangle him. But then he added, "I was looking for who did. That's why I'm here. And from your anguished state, I'd assume that you are too.

Only question is, why is he here?" Jackson nodded at Maven

"I don't believe you" I said, ignoring his query.

"Then why did you ask, if you're not prepared to accept the truth? I wouldn't confess to the murder even if I did do it"

"Why are you here?" Maven interrupted. But he wasn't looking at Jackson. He was looking at me.

"What the hell? Why are you asking me? I came to get Tara! What are you doing here, anyway?" I snapped, telling a half-truth

"Leaving the infirmary after what you did to me. Oh, and by the way, I saw your precious Tara. She's conked out on sedatives. Good luck talking to her" He sneered.

I thought that perhaps after he saved my life, maybe he would become a bit more cordial. Apparently not.

Anger flared. He was so damn annoying. I just wanted to punch him.

"Back to the matter at hand. What are you doing here?" Maven inquired, looking at Jackson this time.

Looking for all the world like he was talking to a business partner, not an attempted murderer.

"Sparring practice" He replied, jerking his chin at me. A small smile played on his lips.

"Yep. Sparring practice. Thanks for your so called help, Maven, but there was no danger." The words tumbled out of my mouth before I knew what I was saying.

Maybe it was because I was so infuriated with maven, but there was no going back now.

"Oh?" said Maven, his raised eyebrow probably referring to the buttload of evidence which said otherwise.

"Your questions and anger?"

"All part of a little welcoming play for you, Maven. Now scurry along and play the hero elsewhere" I taunted

Jackson was watching me, his face a careful mask.

Maven's eyes flicked between mine and Jackson's, uncertainty etched across his face. He didn't know what to make of this. To be fair, I didn't either.

I was siding with a murderer because I felt some frustration at Maven.

Maven stomped off. I waited for him to be truly gone, before facing Jackson. I flipped the knife out of my pocket, and in one smooth move, held it to his throat.

His expression remained passive as I hissed, "You're going to tell me everything"

And that's the end of this chapter! Did you like it. I hope you did. Please leave like if you like! Also, I'm may not update the next week as I shall be very busy-on vacation! Very excited for that, so....