Commaful
Burn It Down part 2 by Sinkingfox 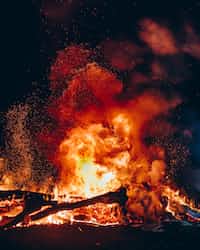 sinkingfox Community member
Autoplay OFF   •   10 months ago
Transcript Use Images
Part two of Burn it Down. A girl whose parents are killed start developing some very strange powers...and she is going to burn it all down.
fiction fantasyfirerebelpower

Burn It Down part 2 by Sinkingfox

I recommend reading part 1- if you haven't already- before you read this one.

Natasha's first spark. Then another and another.

But no secret is ever kept quiet. Before long, news of Natasha's powers had spread. Many people wanted her to storm the ice castle and burn it down.

But Natasha, who wanted to most of all, didn't have enough control, or power. And she knew it.

But she went anyway, dark hair flying in the wind, amber eyes as fiery as the flame she conjured.

It went about as well as you would expect...

Look out for part three, where you will found out what happened!