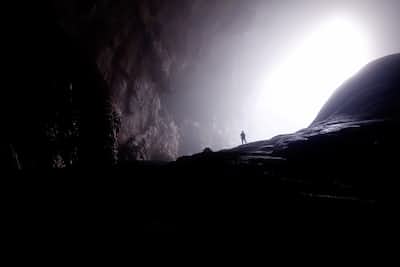 shygirl okay at writing + poems are nice
Autoplay OFF   •   5 years ago
Transcript Use Images
A short story about a trapped soul telling their story of how they got there.
fiction underground

The well was so intimidating. Its bricks were standing strong even after the decay of decades have set in. There was nothing to stop me. The danger beckoned me to the opening.

I looked down leaning over the edge. The well looked so deep the darkness seemed infinite. It was almost as if you fell down and looked up you would never stop falling and see stars in the day.

I picked up a rock who I thought wouldn't mind aiding discovery. I threw him over and funny enough I never heard the hollow splash of the rock contacting the bottom.

I picked up another rock it was considerably larger than the last. I threw that one in as well and leaned in even closer. I heard the rock hit it took ages and by that time it was too late.

I felt myself losing my balance. My heart began to pound as if it was trying to make up for the future it was missing out on. My mind was racing. I knew it was the end. I was still falling.

It was absolutely impossible to tell which end was up and which end was down. Eventually the pain racked through my body I felt all the air get forced from my lungs. I hit the bottom.

I was dead. I knew I was. I saw my crumpled body in the inch of water in the dark. My body was trapped in a well only I knew existed. It stayed there forever. I stayed underground with it.