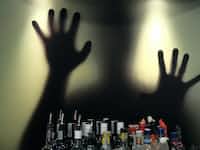 Welcome to The Ghost Story Collaboration on Ants

He was working as an anthropologist.

He went in an expedition in the jungles of Amazon!

He had taken Mr. Smith as assistant.

As they had entered the jungles, they found big ants all over the ground!

Some ants are quite big!

Gradually the sun was about to set!

Suddenly they saw a figure appear in white cloth!

It started to move its hands!

It began dancing and laughing!

Both of them were frightened!

They were surrounded by tribal people living in Amazon!

They came to know that they are cannibals!

All the skulls and human skeleton were piled up!

Their hands were tied...

You will give a shoutout of this horror story!

This is going to be the biggest horror story collaboration on ants!

Interesting, and here&#39;s my continuation! As the tribe moved closer and closer to Mr. Johnson and Mrs. Smith they started to panic. There seemed to be no way out for them! After a great time of struggling on Mr. Johnson&#39;s part, the tribe finally got them both tied up.

Who knew being bound hand and foot to a log was so painful and uncomfortable! The tribe started a great fire and set the logs slightly above it. The heat coming from the fire was stifling and it stole the oxygen directly from both of the captives lungs. Then, all of a sudden there was a noise from the surrounding foliage. @animevampire05