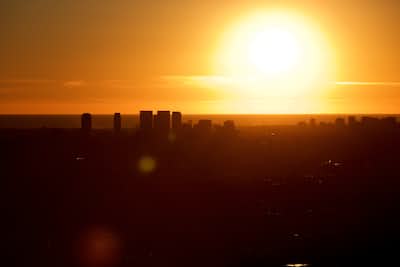 i. stuck at a red light

the sky was the same color as the rosy cheeks of the little girl who crossed the street. She held on tight to her mother’s hands, like the earth held its grip onto the fading sun.

the clouds were her cracked and chapped lips. It was as lively as the skip in her step.

ii. at the beach

the sun blinded me in the water’s reflection tones of orange kissed my already sun-soaked skin. the surface of the ocean reached out to touch Hues of grape-flavored candy.

It was warm, like the sand between my toes.

iii. walking back from the market

Shadows followed me home, Mine grew tall enough to touch the slowly appearing stars. the ground was colored with red crayons and the shadows became doting spirits.

iv. after a long day

It was an impressionistic painting out of a museum. the blues, purples, and pinks were muddled by a careless painter’s brush. It was watered down with the smog from the city streets.

v. made me feel better

the sky smiled back at my glum face. Everything was glowing, celestial, like freckles, birds dotted the golden view. clouds were strung like party streamers,

the air was clean and static, like faded cologne.