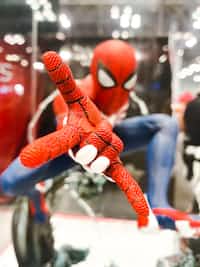 There's one spider in one dimension with no powers.

One is called the "Human Spider" and she runs around in a Halloween Spider-man costume with a baseball bat stopping crime.

The other doesn't really go by a name, mainly because nobody's sure if they even exist!

They work in the shadows, but the only reason people know it's a spider person is the mumbling of the bad guys they've stopped...